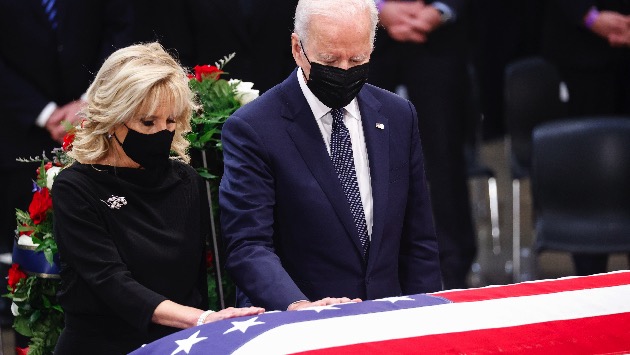 (WASHINGTON) — Former Sen. Bob Dole — decorated World War II veteran, longtime lawmaker and former presidential candidate — will be honored at Washington National Cathedral on Friday before being flown back to his home state of Kansas and laid to rest at Arlington National Cemetery.

Dole died Sunday in his sleep at the age of 98.

President Joe Biden will deliver the eulogy at the funeral service, which will air on ABC News and ABC News Live, as well as on video screens at the World War II Memorial on the National Mall in Washington for public viewing.

A handful of former presidents and other dignitaries are also likely to attend the invitation-only service.

Biden, who served with Dole in the Senate for 25 years and has praised the late Kansas lawmaker for wit that crossed party lines, gave formal remarks on Dole’s service to the nation on Thursday at a Capitol ceremony as Dole lay in state — an honor reserved for the most revered American officials.

“My fellow Americans, America has lost one of our greatest patriots,” Biden said, looking to Dole’s wife of 46 years, Elizabeth, who also served in the Senate, and his daughter, Robin, who is expected to speak Friday. “We may follow his wisdom, I hope, and his timeless truth — that the truth of the matter is, as divided as we are, the only way forward for democracy is unity, consensus. The only way.”

After the funeral, Dole’s motorcade is scheduled to pause at the World War II Memorial for a ceremony paying tribute to his military service. There, Chairman of the Joint Chiefs of Staff Gen. Mark A. Milley and actor Tom Hanks are expected to speak about Dole’s life.

His casket will then be flown to Kansas where Dole will be honored at funeral services in his hometown of Russell and at the Capitol in Topeka, where he served in the state legislature for two years before beginning a 36-year career in Congress.

Dole, who nearly died in WWII and was later awarded two Purple Hearts, served as the Senate Republican leader for more than a decade and was instrumental in the passage of the Americans with Disabilities Act. He sought the presidency three times, winning the Republican nomination in 1996 before losing to incumbent President Bill Clinton, who later awarded Dole the Presidential Medal of Freedom.

Dole announced in February that he had been diagnosed with stage 4 lung cancer and was starting treatment.

In a USA Today op-ed Dole finished on pen and paper less than two weeks before his death, he pushed lawmakers to find common ground in difficult times, writing, “Those who suggest that compromise is a sign of weakness misunderstand the fundamental strength of our democracy.”