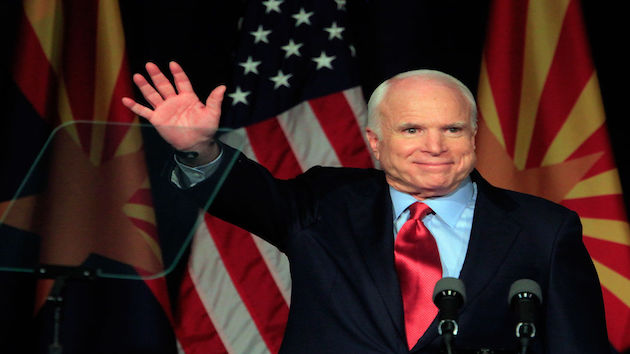 (WASHINGTON) — The White House on Friday announced the next list of recipients of the Presidential Medal of Freedom.

Late Sen. John McCain, a Purple Heart recipient who represented the state of Arizona in Congress for decades before succumbing to glioblastoma in 2018, will be awarded the honor posthumously.

Biden and McCain’s friendship dated back to the 1970s, and the two worked together on a number of issues during their time in the Senate. In 2018, Biden delivered a moving eulogy at McCain’s memorial service, stating “we will not see his like again.”

President Joe Biden will be the first president to award the medals after already receiving one himself. Former President Barack Obama presented the medal to Biden in 2017, who was then serving as vice president.

“This honor is not only well beyond what I deserve, but it’s a reflection of the generosity of your spirit,” an emotional Biden told Obama during the ceremony. “I don’t deserve this. But I know it came from the president’s heart.”

The Presidential Medal of Freedom is awarded to people who have “made especially meritorious contributions to the security or national interests of the United States, to world peace, or to cultural or other significant public or private endeavors.”

“These seventeen Americans demonstrate the power of possibilities and embody the soul of the nation – hard work, perseverance, and faith,” the White House said. “They have overcome significant obstacles to achieve impressive accomplishments in the arts and sciences, dedicated their lives to advocating for the most vulnerable among us, and acted with bravery to drive change in their communities – and across the world – while blazing trails for generations to come.”

Here’s a list of the other 11 Medal of Freedom recipients:

Sister Simone Campbell – Campbell is a member of Sisters of Social Service, and a prominent advocate for economic justice, immigration reform, and healthcare policy.

Dr. Julieta García – García was the first Hispanic woman to serve as a college president, having served in the top position at The University of Texas at Brownsville.

Fred Gray – Gray was one of the first Black members of the Alabama State legislature since Reconstruction, and a distinguished civil rights attorney whose clients included Rosa Parks and Dr. Martin Luther King Jr.

Father Alexander Karloutsos – Karloutsos is a former Vicar General of the Greek Orthodox Archdiocese of America, and as a priest provided counsel to several U.S. presidents

Khizr Khan – a Pakistani immigrant whose son was killed while serving in the U.S. Army, Khan served on the United States Commission on International Religious Freedom under Biden.

Diane Nash – a founder of the Student Nonviolent Coordinating Committee, Nash worked closely with King and other civil rights leaders.

Alan Simpson – Simpson has served in the U.S. Senate for nearly two decades, leading on issues such as campaign finance reform and marriage equality.

Wilma Vaught – Vaught is one of the most decorated women in U.S. military history.

Raúl Yzaguirre – Yzaguirre is a civil rights advocate who served as CEO and president of National Council of La Raza for 30 years, and was once the U.S. Ambassador to the Dominican Republic.