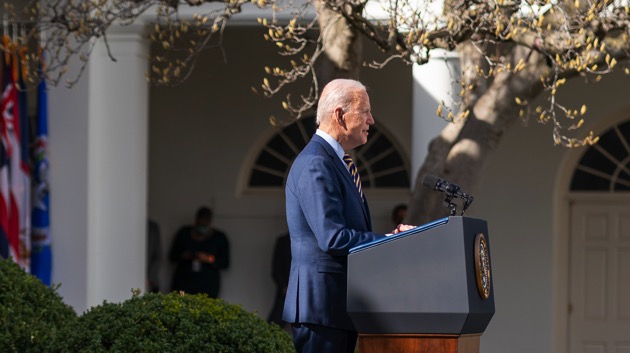 (WASHINGTON) — President Joe Biden will announce Wednesday afternoon that his goal of administering 200 million doses of COVID-19 vaccine during his first 100 days will be reached by Thursday, Day 93 since he took office.

After reaching his initial goal of 100 million shots by Day 58, Biden subsequently doubled the goal. Biden’s total does not include 13 million doses which were administered at the end of the Trump administration.

Even as the administration celebrates that milestone, Biden will also highlight an incentive to encourage those who are hesitant to seek out the shot. The president is set to discuss a paid leave tax credit to employers to fully pay for any time off employees need to either get a shot, or recover from any side effects afterwards.

“The president believes that no one should have to lose a single dollar from their paycheck, because they got vaccinated — plain and simple,” said an administration official. “So that’s why today, the president will call on every employer in America, small, medium, large, to give their employees any time off they need to get vaccinated, with pay. And to give employees any time off needed, if they feel under the weather after the shot, with pay also.”

The tax credit the administration is offering employers was included in Biden’s $1.9 trillion COVID-19 relief plan that has already been signed into law.

The credits are meant for businesses with fewer than 500 employees — the Small Business Administration’s definition of a small business — and will reimburse companies up to $500 per day per employee. Many large companies, an administration official said on a call, have informed the White House they are already offering incentives to their employees to get vaccinated, like providing time off.

Polls consistently show Republican voters are less likely to consider getting vaccinated than Democrats or Independents. White House officials did not directly say their efforts to recruit employers to the cause was designed to appeal to conservatives, although the administration has frequently suggested local leaders are more likely to be effective messengers than federal government officials.

“We do feel confident that if the public sees other people getting vaccinated, including in their workplace, including their employer, people that they know, and hear from local experts, that they will do their homework and make the decision more and more likely to get vaccinated,” an administration official said when asked if the effort was designed to reach skeptical conservatives.