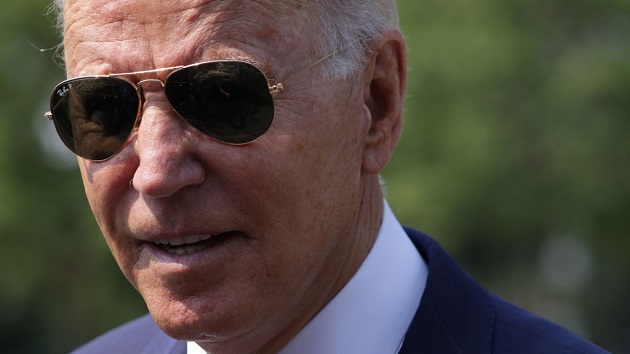 (WASHINGTON) — President Joe Biden taunted Senate Minority Leader Mitch McConnell on Wednesday for having acknowledged his home state of Kentucky will receive money from the Biden administration-backed American Rescue Plan — despite McConnell not having voted for it.

Biden was in Illinois to promote his his “Build Back Better” agenda and sell the bipartisan infrastructure package and a second, larger package on “human infrastructure” that Democrats are hoping to pass through reconciliation — a process which allows them to bypass the usual 60-vote threshold necessary to pass bills in Congress.

“Mitch McConnell says you’re in for a heck of a fight on this one,” Vega said to Biden.

“Mitch McConnell loves our programs,” the president said with a smile.

He added that the Republican leader had acknowledged, as recently as Tuesday, that although he did not support the $1.9 trillion COVID-19 relief package passed in March, its funding will help McConnell’s constituents.

“Have you seen what Mitch McConnell said? He told me he wasn’t going to get a single vote in order to allow me to get, with the help of everybody here, that $1.9 trillion … program for economic growth,” he said. “Look it up, man. He’s bragging about it in Kentucky.”

In fact, McConnell at an event on Tuesday in his home state did talk about the American Rescue Plan.

He also vowed that Republicans would wage a “hell of a fight” if Democrats attempt to pass a sweeping multi-trillion dollar infrastructure plan along party lines.

“This is not going to be done on a bipartisan basis. This is going to be a hell of a fight over what this country ought to look like in the future and it’s going to unfold here in the next few weeks. I don’t think we’ve had a bigger difference of opinion between the two parties,” McConnell said.

In remarks following a tour of McHenry County College, Biden expressed hope that the nation addressing infrastructure will not just drag on and become a running joke as it has been in the past.

“God willing, we’re not gonna have 40 — 40 weeks of, ‘this is infrastructure week.’ Do you remember those?” he said, referring to events during the Trump administration.

Pres. Biden gave remarks at an Illinois community college, touting his American Families Plan.@RickKlein joins @ABCNewsLive to break down what you need to know. https://t.co/Ml7TkwMGbX pic.twitter.com/Wubk6k3Flw

Biden focused his speech — which he concluded by describing as “boring” but “important” — on selling the “human infrastructure” aspects of the American Families Plan, calling it “essential” and the “second critical part” of his domestic agenda that he hopes to include in a reconciliation bill.

“To truly win the 21st Century and once again lead the world, to truly build an economy from the bottom up and the middle out, to truly deal everybody in this time, we need to invest in our people,” he said.

When the Senate returns to Washington next week, lawmakers hoping to move on Biden’s infrastructure agenda will be in a race against the clock to navigate a precarious political landscape before the summer comes to a close.