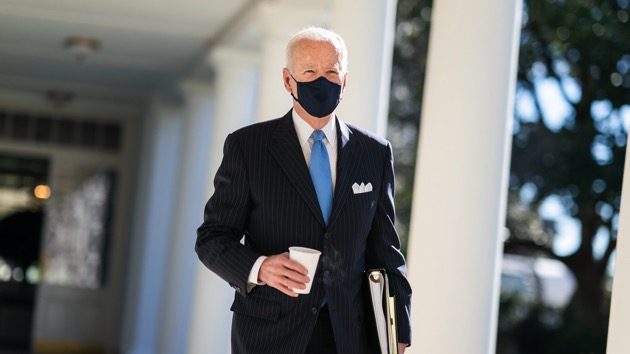 President Joe Biden on Wednesday held his first meeting at the White House with the “big four” congressional leaders, saying they would see whether they can “reach some consensus or compromise” on his proposed costly infrastructure plan.

It’s s the first time Biden has met with McConnell and McCarthy in the Oval Office since becoming president and it came days after McConnell said he was focused “100%” on “stopping” Biden’s agenda.

It’s also the first meeting for the four congressional leaders inside the Oval Office since one with former President Donald Trump imploded in October 2019, ending with Pelosi walking out.

“I’m happy to have the House and Senate leadership here,” Biden told reporters briefly at the top of the meeting. “You can see, Senator McConnell and Leader McCarthy and Speaker Pelosi and Majority Leader Schumer.”

“When I ran, I said I wasn’t gonna be a Democratic president, I was gonna be a president for all American,” Biden continued. “And what the bottom line here is: We’re gonna see whether we can reach some consensus on a compromise, on moving forward.”

Biden said they’re going to discuss infrastructure “to see if there’s any way we can reach a compromise that gets the people’s work done and is within the bounds of everyone agreeing.”

The meeting was set to discuss “policy areas of mutual agreement,” according to the White House, and comes as Biden seeks to push his $2 trillion infrastructure package forward.

The entire interaction with reporters was limited to just one minute and 15 seconds, during which Biden only took one reporter’s question: How do you expect to do that, sir?

McConnell has said he thinks an infrastructure package should cost no more than $800 billion, among other policy issues he’s vowed to fight the president on.

It also came on the heels of House Republicans voting in a closed-door, conference-wide meeting on Capitol Hill Wednesday morning to oust Wyoming Rep. Liz Cheney from her No. 3 leadership position because she spoke out against the former president.

With much of the attention in Washington focused on that vote to remove Cheney, Biden was asked, “Given what’s happened with Kevin McCarthy and his leadership, can you trust him to work with him?”

It was unclear whether he answered.

Georgia allows ‘unborn child’ to count as a dependent on taxes