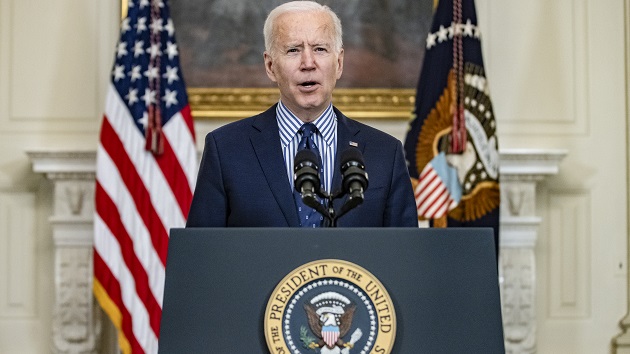 The bill will now move back to the House, which is slated to vote on the Senate’s amended legislation Tuesday. But even as the White House celebrates the victory, the way the measure passed the Senate could be a bellwether for what’s ahead for Biden.

The Senate passed the bill with only Democratic support, despite the president’s hope the bill would earn bipartisan votes, as previous COVID-19 packages have, allowing him to follow through on a well-worn campaign pledge to work across the aisle.

And just getting all 50 Senate Democrats on board for COVID-19 relief proved to be a challenge after moderate Sen. Joe Manchin (D-W.Va.) put a nearly 12-hour delay on the Senate proceedings over an objection to the bill’s extended unemployment benefits.

There were attempts at earning bipartisan support for the bill. The president’s first Oval Office meeting was with 10 Republican senators who put forward a $600 billion relief counterproposal. Despite the meeting and the White House’s continued insistence that the administration was open to finding areas of compromise, Democrats moved forward with reconciliation to pass the bill, requiring only Democratic support for the legislation and dimming the prospects of major compromise.

The failure to win Republican support for the widely popular bill has also raised questions about the viability of Biden’s future legislative agenda and his ability to pass the bold policy proposals from his campaign, many of which will require the support of at least 10 Republican senators. On Saturday, Biden brushed off the concern.

“I’m going to succeed. We’re going to succeed moving forward. Look, the American people strongly support what we’re doing. That’s the key here. And that’s going to continue to seep down through the public, including from our Republican friends. There’s a lot of Republicans who came very close, they’ve got a lot of pressure on them. I still haven’t given up on getting their support,” Biden told reporters following his remarks.

Biden also bristled at the suggestion that progressive Democrats were frustrated by the compromises that were made to assuage moderates like Manchin, including reducing the weekly unemployment benefits that were included in the House version of the bill.

“They’re not frustrated. Bernie Sanders said this is the most progressive bill he’s ever seen passed in this — since he’s been there,” Biden said.

“The end result is essentially about the same. And so, I don’t think any of the compromises have in any way fundamentally altered the essence of what I put in the bill in the first place.”

Still, Biden is likely to face familiar fault lines on policy within the party going forward, highlighted by the divide over raising the $15 minimum wage — a measure Biden included in his initial relief proposal but not included in the Senate bill after the Senate Parliamentarian said could it not be included if passed by reconciliation.

Eight members of the Democratic caucus joined Republicans in voting against an amendment put forward by Sen. Bernie Sanders (I-Vt.) to overrule the Parliamentarian’s decision.

“If any Senator believes this is the last time they will cast a vote on whether or not to give a raise to 32 million Americans, they are sorely mistaken,” Sanders warned in a statement after the vote on the amendment, previewing a legislative battle ahead for Biden.

The White House has remained tight-lipped about what its next legislative push will be after the relief package. Biden has already introduced a sweeping immigration proposal that would give 11 million undocumented immigrants a pathway to citizenship and has held bipartisan meetings on infrastructure.

But Biden has also previewed that the relief bill was just part one of his overall recovery plan for the country.

“In my first appearance before a joint session of Congress, I will layout my Build Back Better recovery plan. It will make historic investments in infrastructure, that Build Back Better plan. Infrastructure, manufacturing, innovation, research and development, and clean energy. Investments in a caregiving economy and skills and training needed by our workers to be able to compete and win in the global economy,” Biden said in January remarks announcing the American Rescue Plan prior to taking the oath of office.

In the weeks since Biden was inaugurated, the White House has been laser-focused on getting what would be one of the biggest stimulus plans in U.S. history through Congress, curating Biden’s public remarks and appearances to promote the plan that would give $1,400 direct stimulus checks to most Americans, allocate $130 billion to reopen schools and provide $160 billion for vaccinations and testing.

“When we took office 45 days ago, I promised the American people that help was on the way. Today, I can say we’ve taken one more giant step forward in delivering on that promise that help is on the way,” Biden said in remarks Saturday afternoon.

Biden also said he expects the direct payments to Americans to go out the door by the end of the month.

“Look, the bottom line is this: This plan puts us on a path to beating the virus. This plan gives those families who are struggling the most — the help and breathing room they need to get through this moment,” Biden said.