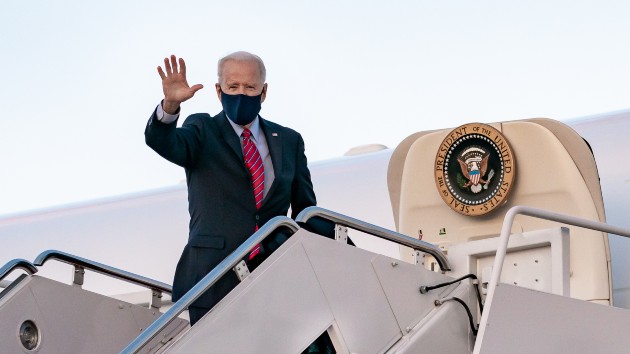 (WASHINGTON) — President Joe Biden is taking his pitch for COVID-19 relief outside of Washington for a second time this week, heading to the politically critical state of Michigan to tour a Pfizer vaccine manufacturing site.

The trip is part of an effort to continue building support for the plan that so far is popular with Americans but has no buy-in from Congressional Republicans.

The president will travel to Kalamazoo, Michigan, on Friday afternoon to deliver remarks and meet with workers at the plant, which is a critical hub for producing the vaccine, according to the White House. The trip was initially set for Thursday, but it was delayed a day due to the winter storm moving across the East Coast.

The visit comes as the administration continues to bolster vaccine availability and distribution across the country, promising that by the end of July there will be enough vaccine available so that any American who wants it can get it.

It will also follow a pair of international meetings Biden is attending Friday morning — a virtual G-7 conference and a virtual Munich Security Conference — during which he is expected to speak about the impact of COVID-19 globally and announce the U.S. will donate a total of $4 billion to deliver COVID-19 vaccines to poor countries.

In the domestic effort to get the virus under control, Biden will again make his case directly to the American people for the first legislative undertaking of his presidency, which would deliver direct relief payments to the majority of people in the U.S. and allocates billions of dollars for reopening schools and increasing vaccinations across the country.

“In order to grow the economy a year, two, three, and four down the line, we can’t spend too much,” Biden said during a CNN town hall in Wisconsin Tuesday night. “Now is the time we should be spending. Now is the time to go big.”

Democrats are continuing to advance the legislation in Congress through reconciliation, looking to pass the bill ahead of the looming mid-March expiration date for extended unemployment benefits included in the previous COVID-19 relief bill.

Speaker Nancy Pelosi said the House hopes to pass its version of the legislation next week to send the bill to the Senate. Biden has stressed his desire to pass the legislation with bipartisan support but said he isn’t willing to delay delivering relief to the American people to do so.

Balking at the price tag, no Republicans in Congress have signed on to the nearly $2 trillion dollar bill yet.

White House advisers have argued that while bipartisan support in Congress continues to lag, support from across the political spectrum does exist for the bill. A new poll from Quinnipiac University shows 68% of Americans support passing the legislation, including 37% of Republican voters.

While internal discussions about the next steps in Biden’s agenda have begun, White House press secretary Jen Psaki made it clear in her briefing Thursday that COVID-19 relief would remain the top priority of the Biden White House until it’s passed.

“I would not expect the president or any of us to lay out next pieces of his agenda until that package is through and signed and that release is out, going out to the public,” Psaki said.