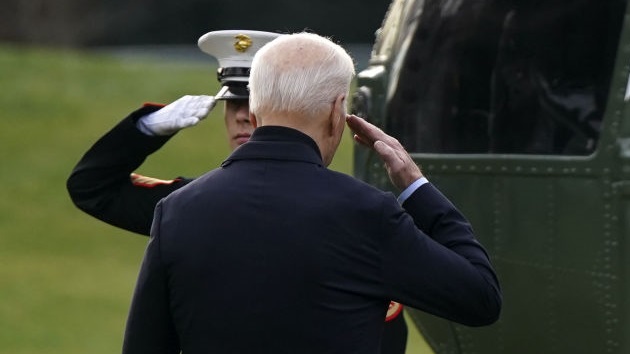 Biden viewed damage in Mayfield before heading to Dawson Springs and also make remarks on the federal response and “extreme weather,” according to the White House.

Shortly before noon, Marine One landed in Mayfield, and Biden was greeted on the tarmac in Fort Campbell by Kentucky Gov. Andy Beshear, stopping for a five-minute conversation.

Deputy principal press secretary Karine Jean-Pierre said Biden’s message on Wednesday “is that he and the federal government intend to do whatever it takes, for as long as it takes, by providing any support that is needed to aid recovery efforts and support the people of Kentucky — and of other impacted states as they rebuild.”

“It is going to be a very long, long road ahead. And so that’s the president’s focus right now is to talk, specifically to hear from the elected officials on the ground,” she told reporters earlier on Air Force One.

Before receiving a briefing from state and local officials in Kentucky, Biden vowed all the federal support he can provide to the area, both now and in the months to come.

“Immediately after a disaster is a time when people are really, really moving, and trying to help each other and trying to get things done. But after a month, after six weeks, after two months, people can get themselves to a point where they get fairly depressed about what’s going on, particularly young kids, particularly people who’ve lost somebody. And so I just want you to know, the help that we’re able to offer at the federal level, is not just now,” Biden said.

“I’ve instructed my team to make you all aware of everything that is available from a federal level,” Biden added later on. “And some of it has to do outside of FEMA, outside of Homeland Security, there’s other programs, including education, there’s a whole range of things, but I’m here to listen.”

The president seemed struck by the scale of the damage he saw on his aerial tour.

“As you fly over here, as I’ve done in the past, I’ve not seen this tornado, this much damage from a tornado. You know, you think, but for the grace of God, why was I not 100 yards outside that line? Which makes it so different,” he noted.

After a briefing in Mayfield by local leaders “on the impacts of the tornadoes and extreme weather,” according to the White House, Biden will then continue on to Dawson Springs and that tour will culminate in remarks at 4 p.m. EST.

White House press secretary Jen Psaki earlier this week said Biden will not be delivering a “major speech” there but rather will be “trying to be a source of comfort to people who have gone through a devastating couple of days in their communities.”

“I would expect while he’s there, he will receive an update from local authorities on what their needs are, see local elected officials and discuss in person with them and make sure they’re getting what they need from the federal government,” Psaki said.

Biden was joined for the visit by Department of Homeland Security Secretary Alejandro Mayorkas and FEMA Administrator Deanne Criswell, who were on the ground there on Sunday.

On Trump’s last day in office, why were sensitive documents allegedly in such disarray?

Experts say Trump, election deniers eroding trust in democracy. Can it be restored?