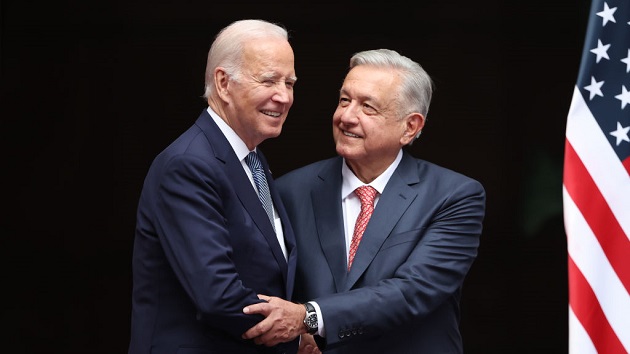 (MEXICO CITY) — President Joe Biden on Tuesday said that he was “surprised” to learn that that any government records had been taken to a former personal office where classified documents were discovered in November.

He defended how the discovery of the documents was handled, saying that he does not know the contents, and insisted his lawyers immediately turned the documents over to the appropriate authorities at the National Archives.

“When my lawyers were clearing out my office at the University of Pennsylvania, they set up an office for me, a secure office, in the Capitol, the four years after being vice president, I was a professor at Penn. They found some documents in a box, you know, in a locked cabinet, or at least a closet. And as soon as they did, they realized there were several classified documents in that box and they did what they should have done,” he said.

He did not answer a reporter’s question about whether the public have been notified sooner.

His comments came a day after his special counsel confirmed the classified documents were discovered.

Meeting with Canadian Prime Minister Justin Tuesday morning in Mexico City, Biden ignored reporters’ efforts to shout versions of that question, instead focusing on his goals for the summit.

The Justice Department is currently looking into the matter, scrutinizing the set of documents, which were discovered in early November at the University of Pennsylvania’s Penn Biden Center in Washington. Biden worked there in the years following his vice presidency. The existence of the documents was first reported Monday by CBS News, and confirmed by ABC News.

The FBI and DOJ have been conducting a preliminary investigation for weeks to determine how the documents got to the Penn Biden Center, whether Biden was involved in transferring them there or whether he was aware they were there at any point. The goal of the investigation, sources say, is to determine whether there were any significant crimes committed and whether there’s a need for a special counsel to be appointed.

Sources said there were approximately 10 documents discovered by Biden’s personal attorneys including some that were marked “Top Secret” and they were from the timeframe between 2013 and 2016.

Two sources confirmed that the information was turned over to the National Archives which then reached out to DOJ, after which Attorney General Garland moved to task U.S. Attorney John Lausch — an appointee of former President Donald Trump, with leading a review into the matter.

Sources describe the preliminary investigation as “well underway” and that Lausch has briefed Garland, but it’s unclear when exactly his final report will be completed.

Some critics have complained that since the documents were discovered just days before the midterms, suggesting that the Biden administration should have disclosed it. But officials familiar with the case say while the White House could have seen fit to release information, the DOJ typically works in secret on such investigations.

Two sources say this is being handled precisely the way the Trump Mar-a-Lago controversy was handled by DOJ, the officials noting it was many months before it was revealed there was a grand jury subpoena of Trump for documents with classified markings still in his possession and the details of DOJ’s communications with Trump attorneys came out.

One source also told ABC News “it doesn’t appear that Biden personally identified the documents” and asked that they be moved to the private office.

While Biden has yet to comment on the politically explosive matter, he has not been shy to criticize former President Donald Trump’s mishandling of classified information, after the FBI raided Trump’s personal office at the Mar-A-Lago club in Palm Beach, Florida, in August.

“How that could possibly happen? How one — anyone could be that irresponsible? And I thought, what data was in there that may compromise sources and methods? By that I mean names of people who helped or th– et cetera. And it just — totally irresponsible,” Biden said in an interview on the CBS News program “60 Minutes” in September.

In August, when asked whether it is ever appropriate to take classified documents home, away from the White House, Biden told reporters, “it depends.”

“Depending on the circumstance. For example, I have in my home a, a cabined-off space that is completely secure. I’m taking home with me today, today’s PDB (President’s Daily Brief). It’s locked, I have a person with me, military with me. I read it, I lock it back up, and give it to the military,” Biden said, when asked if it was ever appropriate to take home classified documents.

When pressed whether it would be appropriate to do without a specialized, secured area, Biden once again said, “it depends.”

“Depends on the document and it depends on how secure the room,” Biden said.

According to a statement from Richard Sauber, President Biden’s special counsel, the White House is fully cooperating with the National Archives and the Department of Justice in this matter. The statement claims the documents were immediately handed over for review upon discovery by the president’s personal attorneys, who were packing files in order to vacate the office.

Former President Trump reacted to the discovery of the Biden documents Monday evening on his Truth Social account.

“When is the FBI going to raid the many homes of Joe Biden, perhaps even the White House? These documents were definitely not declassified,” Trump claimed.

On Capitol Hill Tuesday, newly-empowered House Republicans were quick to call for investigation. Rep. Mike Turner of Ohio, the top Republicans on the House Intelligence Committee, asked Director of National Intelligence Avril Haines to carry out “an immediate review and damage assessment” pertaining to the storage of the documents.

Other Republicans drew a comparison between the Biden documents, and the ongoing legal fight over the classified documents discovered at Trump’s personal office.

“It’s unprecedented to raid the residence of a former president for something that every president, including the current president, has done accidentally — I’m gonna assume accidentally – pack documents that may be classified,” Rep. James Comer of Kentucky, the GOP chairman of the House Judiciary Committee, told ABC News.

Some Democrats are also expressing concern.

“Obviously if there are classified documents anywhere they shouldn’t be, that’s a problem and a deep concern,” said Rep. Adam Schiff of California, former chairman of the House Intelligence Committee.