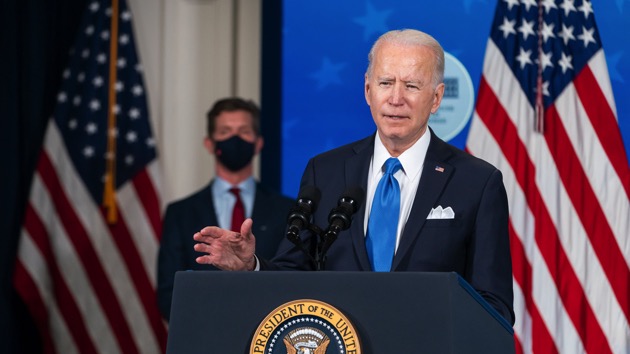 (WASHINGTON) — President Joe Biden will lay out the contours of his latest ambitious legislative proposal — his “American Families Plan” — in his address Wednesday night to a joint session of Congress, calling on lawmakers to pass what the White House is calling “a once-in-a-generation investment in our nation’s future.”

The $1.8 trillion plan would create universal pre-K for 3- and 4-year-olds, and fund two years of free universal community college. The plan would cap how much low and middle-income Americans must spend on child care, extend Affordable Care Act tax credits and expand paid leave. Spending on the new programs account for $1 trillion of the price tag, while $800 billion would go to tax cuts for middle and lower income Americans.

“The American Families Plan invests in our children and our families, helping families cover the expenses that so many struggle with now, lowering health insurance premiums, cutting child poverty and producing a larger, more productive, and healthier workforce in the years ahead,” a senior administration official said on a call with reporters.

To pay for it, the White House proposes raising taxes on the wealthiest Americans and wealthy investors. The plan would increase tax audits for the wealthy and increase the capital gains tax for households making over $1 million.

If Congress passes the plan, senior White House officials say some provisions, like increased Pell Grants, could take effect rather quickly, while others, like paid leave, would take years to phase in. The White House sees this broadly as a 10-year plan.

Here are some key takeaways:

The plan would create universal, free pre-K for 3- and 4-year-olds. It envisions a federal-state partnership much like Medicaid, whereby states would initially be responsible for 10% of the funding, which would eventually scale up to 50%. If states choose not to opt into the program, a senior administration said they would “work directly with a locality on preschool.”

The official pointed out some Republican governors have embraced universal preschool, so there administration officials hope willingness to set up these state-federal partnerships exists.

The plan would also fund two years of free community college to all Americans, including undocumented immigrants brought into the U.S. as children. Students could take an equivalent number of credits over 3 or 4 years if needed to accommodate work schedules. The administration also intends this to be a state-federal partnership, but would partner directly with schools if states opt out. The administration estimates this would help 5.5 million students receive free community college if all states participated.

Families would pay only a portion of their income for child care costs. Lower-income families’ costs will be completely covered, while families making up to 150% of a state’s median income will be capped at paying 7% of their income for childcare. (So for example, in Pennsylvania, where the state median income is about $60,000, a family making up to $90,000 per year would be capped at paying $6300 per year for childcare, or $525 per month.) Families could choose between options like child care centers, family child care providers, and Early Head Start.

The program would provide partial wage replacement for those dealing with illness of a loved one, domestic violence, military deployments, and other situations. It would guarantee 12 weeks of paid parental, family, and personal illness leave by year-10, scaling up over time. Workers could receive up to $4000 per month, with a minimum of two-thirds of wages replaced.

During the pandemic, Biden’s COVID-19 relief plan expanded who was eligible to receive a tax credit for paying Obamacare premiums, and lowered the maximum amount any consumer could pay for healthcare. This plan seeks to make those changes permanent. The White House estimate these changes save families an average of $50 per person per month.

Biden’s COVID relief bill also increased the child tax credit from $2000 to $3000 for children over 6 and $3600 for children under 6, and made it fully refundable. The American Families Plan would extend that tax credit until 2025 and make payments delivered monthly. Some Democrats have called on Biden to propose making this tax credit permanent. Biden would also permanently extend the earned income tax credit.

HOW WOULD ALL THIS BE PAID FOR?

The plan seeks to overturn many of Trump’s 2017 tax cuts. It also calls for increased reporting from financial institutions to ensure wealthy Americans pay what they owe — the White House estimates this could reap $700 billion over 10 years.

Biden will proposed increasing the top tax rate to 39.6% (Trump had cut this rate to 37% in 2017) and increasing the capital gains tax for households making more than $1 million to the income tax rate. The White House says the plan would end loopholes that allow passing down inheritances untaxed and close the carried interest loophole.

WHAT DOES THE PLAN NOT INCLUDE?

Democrats in high-income states like New York and California have been clamoring for the Biden administration to end a $10,000 cap on state and local tax deductions, which has resulted in a tax hike for many of their middle class constituents. Some moderate Democrats have taken to saying, “No SALT, no deal,” so this could spell trouble for Biden on Capitol Hill.

This bill does not include provisions to lower the Medicare eligibility age, or lower prescription drug costs. Though it does extend ACA subsidies, some Democrats who have urged the White House to address these health care priorities will surely be disappointed that the bill leaves them out. The ACA subsidy, a senior White House official told reporters, “is one of the most impactful investments we can make in terms of reducing the costs of health insurance.”

“The president’s been very, very clear that he remains fully committed to negotiations to reduce prescription drug prices that we will hear him reiterate as a very top priority and something urgent,” the official said.