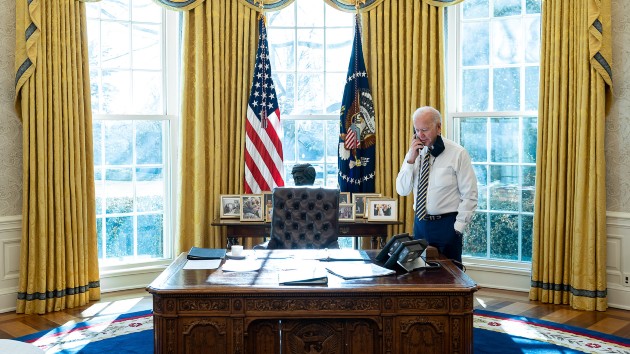 (WASHINGTON) — President Joe Biden on Wednesday evening held his first phone call with China’s President Xi Jinping since taking office, according to the White House, and officials said he aimed to set a tone that differed from former President Donald Trump’s approach.

Biden brought up a number of thorny topics, ranging from economic competition between the U.S. and China and the latter’s record on human rights.

“President Biden underscored his fundamental concerns about Beijing’s coercive and unfair economic practices, the crackdown in Hong Kong, human rights abuses in Xinjiang, and increasingly assertive actions in the region, including toward Taiwan,” the White House said in a statement.

The presidents also “also exchanged views on countering the COVID-19 pandemic, and the shared challenges of global health security, climate change and preventing weapons proliferation,” and Biden spoke about American priorities, including “preserving a free and open Indo-Pacific,” the White House said.

A senior Biden administration official said the president had been “looking forward to the call” and portrayed it as a chance for him to set the tone for his relationship with the Chinese leader, one in which they could “work through challenges” and also “work together,” on issues such as on climate change and nuclear proliferation.

“He obviously has spent a lot of time with Xi Jinping over the years, and the two leaders know each other very well,” the official told reporters before the leaders spoke. “He knows what he wants to lay down in terms of the range of concerns he has with China’s actions and policies. He also wants to ensure that the two of them have the opportunity to have an open line of communication.”

According to a readout published by Xinhua News Agency, Xi told Biden that a U.S.-China confrontation would be disastrous for both counties.

“You said that the greatest feature of America is possibility. I hope that this possibility now develops in a direction conducive to the improvement of bilateral relations. The two countries should work together and meet each other halfway,” he told Biden, adding that while they will have different views on some issues, “the key is to respect each other, treat each other as equals, and properly manage and handle them in a constructive manner,” according to the readout.

The White House did not elaborate on the nature of the presidents’ discussion about the coronavirus pandemic.

Asked if Biden had planned to raise the question of U.S. participation in the 2022 Olympics in Beijing — considering the U.S. has labeled China’s repression of the Uyghurs in Xinjiang province “genocide” — an official said the topic would not be on the call’s agenda and that the U.S. had not yet “engaged” with China on that issue.

Biden has sought to approach China differently than his predecessor did, after Trump launched a trade war against China and squarely blamed it for the COVID-19 outbreak.

“We looked at what the Trump administration did over four years and found merit in the basic proposition of an intense strategic competition with China and the need for us to engage in that vigorously, systematically across every instrument of our government and every instrument of our power,” a senior administration official said. “But we found deep problems with the way in which the Trump administration went about that competition and, in particular, our diagnosis was that the Trump strategy depleted core American sources of strength that put us in a weaker position with which to carry out that competition.”

The Biden administration believes its predecessor weakened the U.S. position by ceding influence on international institutions to China and by creating a “lack of clarity and consistency” about American values, according to the official.

“America’s policy was doing China’s work for it under the Trump administration,” the official said.

But one thing largely staying in place, at least for now: Trump’s tariffs.

The official said Biden had so far kept the tariffs in place “not because we think that that trade war was particularly successful, but rather because we believe that we have to very carefully, in consultation with allies and partners, in consultation with the Congress, work through the sources of leverage we have on the economic front and move out with a sharper, more effective trade strategy towards China, off the baseline of the existing tariffs — not pulling them all back right out of the gate.”

“And so we are working through that while those remain in place,” the official said.