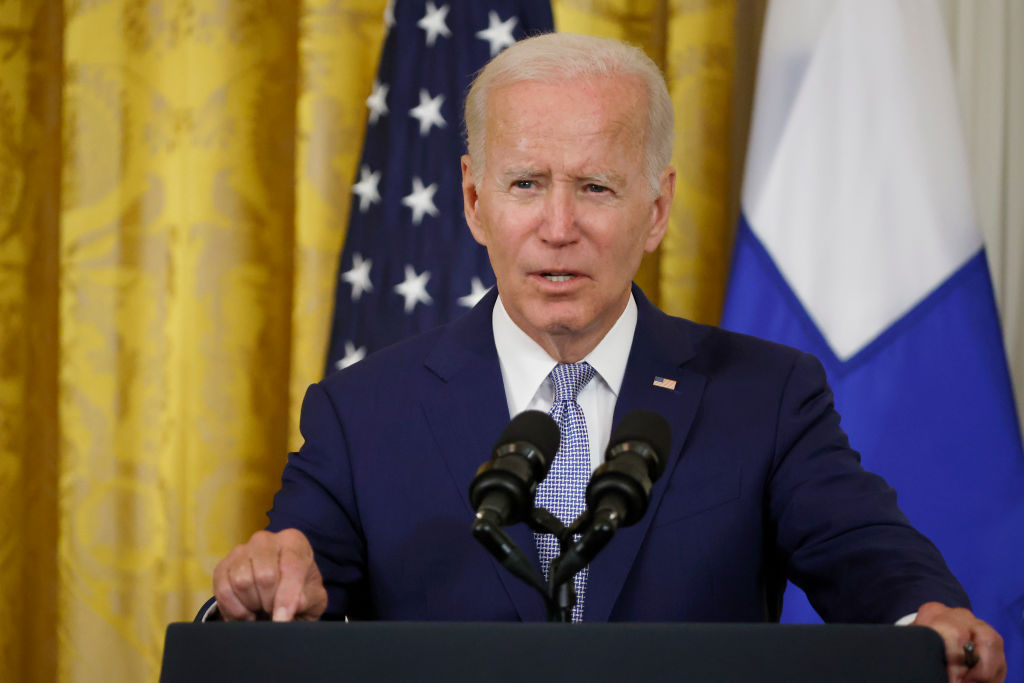 Speaking from the White House State Dining Room, Biden touted the Inflation Reduction Act as “further proof that the soul of America is vibrant, the future of America is bright and the promise of America is real and just beginning.”

“The American people won and the special interests lost,” he said before swiping at Republicans for their unanimous opposition.

“That’s the choice we face. We can protect the already powerful or show the courage to build a future where everybody has an even shot,” Biden said.

Taking advantage of some political momentum, Biden interrupted his summer vacation for the signing just days after the House approved the measure, following Senate passage by just one vote amid some political drama. He has spent much of the past week in South Carolina. Biden arrived at the ceremony wearing a mask after spending his vacation with first lady Jill Biden, who has tested positive for COVID-19.

“I am confident this bill will endure as one of the greatest legislative feats in decades. It’ll lower costs, create millions of good paying jobs and is the boldest climate bill ever,” Schumer, D-N.Y., said, speaking just before Biden.

After signing the bill, Biden handed one of pens he used to Manchin, who placed it in his pocket. Speaking to reporters outside the White House afterward, Manchin called it a “very nice gesture.”

Manchin said he knew people were “upset” when he walked away from Biden’s “Build Back Better” plan late last year and that he kept negotiations with Schumer on the Inflation Reduction Act under wraps because he didn’t want “anyone to get disappointed again because I didn’t think we could get there.”

“But I truly believe that I’ve never seen a more balanced bill,” Manchin said, adding that in different political atmosphere it would’ve been a bipartisan undertaking.

A larger celebration for the law is being planned for Sept. 6.

The White House also said that, “in the coming weeks,” Biden will host a Cabinet meeting focused on implementing the new law and will also travel across the U.S. to promote it.

The Biden administration has planned a cross-country rollout campaign for the legislation, which aims to make prescription drugs and health insurance cheaper; invest in clean energy and curb climate change; raise taxes on the wealthy; and cut the deficit.

Starting this week through the end of August, Cabinet members plan to travel to 23 states, on more than 35 trips, to tout the “Inflation Reduction Act,” according to the White House.

The administration also plans to roll out information online and on social media about the legislation’s impact, and to collaborate with members of Congress to host hundreds of events, the White House said.

In a memo the White House made public from Senior Adviser Anita Dunn and Deputy Chief of Staff Jen O’Malley Dillon to Chief of Staff Ron Klain, the administration plans to not only tout passage of the IRA, but also the CHIPS Act aimed at boosting the U.S. semi-conductor industry over China’s and easing a pandemic-cause shortage, the bipartisan gun control bill and the bipartisan infrastructure bill.

Ahead of Tuesday’s signing, the White House on Monday put out what it said would be the Inflation Reduction Act’s impact.

According to the White House, about 1.4 million Americans who are on Medicare who usually spending more than $2000 per year on prescription drugs will see their costs capped at that amount. Overall, it says, there are about 50 million Americans on Medicare Part D who are eligible for that cost cap.

The White House said there are about 3.3 million Americans on Medicare who use insulin, who will benefit from the new $35 monthly price cap.

Lower Obamacare premiums will be extended for the 13 million Americans insured under that program, the White House said.

And the White House also claims greenhouse gas emissions will be reduced by a billion metric tons in 2030 thanks to the Inflation Reduction Act.