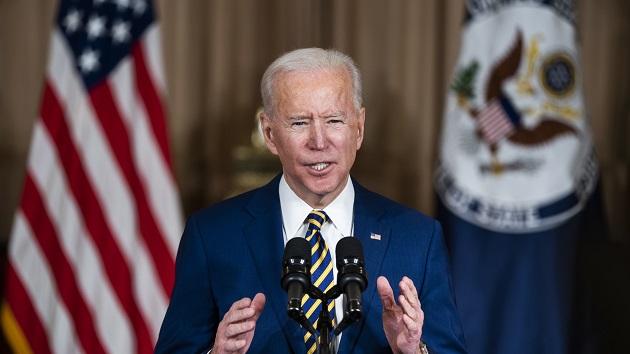 (WASHINGTON) — President Joe Biden on Thursday planned to deliver his first major foreign policy speech during a visit to the State Department where he signaled he would place diplomacy at the center of U.S. foreign policy.

“America is back,” Biden told State Department staff who had assembled in person and virtually to hear him speak ahead of his address. “Diplomacy is back. You are the center of all that I intend to do. You are the heart of it.”

He also signed a presidential memorandum on Thursday that his national security adviser, Jake Sullivan, said would focus on “protecting the rights of LGBTQ individuals worldwide.” Sullivan told reporters that Biden would speak more about the move during his afternoon remarks.

“It reflects his deep commitment to these issues both here in the United States and everywhere around the world,” Sullivan told reporters Thursday. “And the United States will speak out and act on behalf of these rights as we go.”

At the State Department, the first federal agency he has visited in person as president, Biden planned to announce an “end to American support” for the Saudi-led military campaign in Yemen, Sullivan said. The halt would not include U.S. action against al-Qaida in the Arabian Peninsula, according to Sullivan.

The Trump and Obama administrations had backed Saudi Arabia in its fight against Iranian-allied Houthi rebels in Yemen, but the kingdom’s offensive had drawn condemnation for alleged human rights abuses, with the Trump administration eventually dialing back support.

Since taking office, Biden had already frozen a U.S. arms sale to Saudi Arabia, as well as another sale to the United Arab Emirates, which is part of the coalition fighting the Houthis.

“Stopping U.S. military support to the Saudi-led coalition was expected, but it will not prevent the human suffering that is happening in that country,” said Mick Mulroy, a former Defense Department official and CIA officer who is now an analyst for ABC News. “There needs to be a comprehensive international plan, preferably led by the United States, to support the United Nations in attaining a lasting peace agreement and taking Yemen from a failed state to a fragile one and eventually to a fully functional country.”

The president did not intend to give a full view of his foreign policy doctrine at the State Department but rather wanted to focus on “his early decisions and actions,” which Sullivan said broke down into five lanes: domestic investments “to shore up our country’s foundations,” “revitalizing America’s alliances,” a commitment to multilateralism by “re-engaging key institutions and agreements,” “reasserting our values,” and “making sure that our global force posture is consistent with our national security and diplomatic priorities.”

“We must meet this new moment of accelerating global challenges — from a pandemic to the climate crisis to nuclear proliferation — challenges that will only be solved by nations working together in common cause,” Biden planned to say, according to the White House.

In fact, rolling back former President Donald Trump’s nationalist approach to the world — which Trump had termed “America First” — has already become a hallmark of Biden’s short time in the White House.

Biden has returned the United States to international agreements and organizations his predecessor left — including the Paris climate accord and the World Health Organization — and has endorsed a multilateral approach to issues ranging from the COVID-19 pandemic to China and Iran.

“America’s alliances are among our greatest assets,” the president planned to say at the State Department, according to the White House. “And leading with diplomacy means standing shoulder to shoulder with our allies and key partners once more.”

The State Department itself has been left battered after Trump sidelined the agency, with proposed budget cuts, taunts against the “deep state” department and political retaliation against career diplomats.

Biden told staff there that it would be different in the years ahead.

The president also planned to discuss refugees. As a candidate, he planned to drastically raise the number allowed into the United States, which Trump had slashed — but the White House said Biden did not plan to sign a related executive order Thursday.

“The president is certainly committed to looking for ways to ensure more refugees are welcomed into the United States,” White House press secretary Jen Psaki told reporters. “It’s a priority to him personally.”

The president’s afternoon trip to the State Department, the first federal agency he has visited in person as president, would also include a meeting with State Department career officials from both the foreign service and civil service, Sullivan said.

Biden had originally planned to visit the State Department Monday, but his remarks were pushed to later in the week because of a snowstorm that hit Washington, according to the White House.