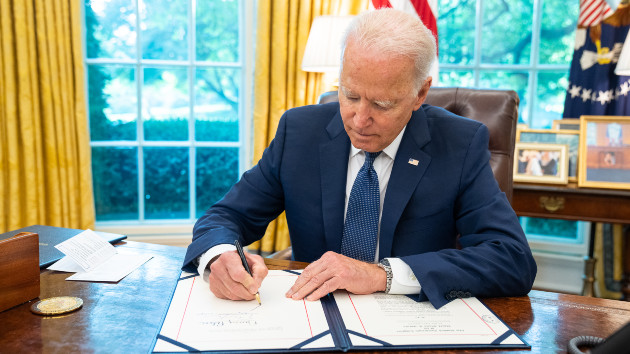 Thousands of people gathered on the White House South Lawn to commemorate the Respect for Marriage Act becoming law.

“Today is a good day,” Biden said as he took the podium after Vice President Kamala Harris. “A day America takes a vital step toward equality, for liberty and justice — not just for some, but for everyone. Toward creating a nation where decency, dignity and love are recognized, honored and protected.”

“Look, we’re here today to celebrate their courage and everyone who made the day possible,” the president continued. “Courage that led to progress we’ve seen over the decades, progress that gives us hope that every generation will continue on our journey toward a more perfect union.”

The ceremony included performances from Grammy winners Sam Smith and Cyndi Lauper. Smith, who announced in 2019 they were nonbinary and use they/them pronouns, performed their hit song “Stay With Me” followed by Lauper singing “True Colors.”

Appearing in the White House briefing room ahead of her performance, Lauper, a longtime LGBTQ advocate, told reporters, “We can rest easy tonight because our families are validated.”

She founded the True Colors Fund, a nonprofit that educates people on LGBTQ issues and helps to end homelessness for LGBTQ youth.

A White House official said that notable guests attending the signing ceremony included Club Q founder Matthew Haynes and two survivors of the shooting that happened just last month at the Colorado Springs, Colorado, LGBTQ nightclub. Other attendees included a survivor of the 2016 Pulse nightclub shooting that killed 49 people in Orlando, Florida, and plaintiffs and counselors from the Obergefell and Loving Supreme Court cases.

“We must stop the hate and violence like we just saw in Colorado Springs for a place of acceptance and celebration was targeted for violence and terror,” Biden said Tuesday. “We need to challenge the hundreds of callous, cynical laws introduced in the states targeting transgender children, terrifying families and criminalizing doctors who give children the care they need. We have to protect these children so they know they’re loved and we will stand up for them.”

“Folks, racism, antisemitism, homophobia, transphobia are all connected,” Biden continued. “But the antidote to hate is love … This law matters to every single American no matter who you are or who you love.”

The Respect for Marriage Act passed with bipartisan support in both chambers of Congress after months of negotiation, particularly over provisions related to religion. The House voted last week 258-169 to send the bill to Biden’s desk after the Senate passed it 61-36. A minority of Republicans joined Democrats in both votes.

It became a priority for Democrats after the Supreme Court’s June decision in Dobbs v. Jackson Women’s Health Organization, in which five conservative justices overruled Roe v. Wade and the national guarantee to abortion access.

Justice Clarence Thomas, in a concurring opinion, said he believed the court should reconsider other precedents based on similar legal doctrine, including 2015’s Obergefell v. Hodges — which found that the 14th Amendment requires all states to license same-sex marriages.

The Respect for Marriage Act doesn’t include Obergefell’s national requirement but will mandate that individual states recognize same-sex and interracial marriages that were lawfully performed in another state.

Some Republicans who voted for the legislation in Congress noted additional language around protecting religious groups who still object to same-sex marriage.

Biden has long been outspoken on the issue of same-sex marriage and in 2012, famously preempted then-President Barack Obama in declaring his public support.

“Who do you love? Who do you love and will you be loyal to the person you love?” Biden said then. “And that’s what people are finding out, what all marriages at their root are about.”

After Lauper finished her performance at the bill signing, audio of Biden’s 2012 “Meet the Press” interview was played. A White House official said they planned to distribute commemorative items at Tuesday’s ceremony that invoke Biden’s remarks from 10 years ago announcing his support for gay marriage.

As Biden finished signing the law to cheers from the crowd, Lady Gaga’s pro-LGBTQ song “Born This Way” began to play.

House Speaker Nancy Pelosi and Senate Majority Leader Chuck Schumer kicked off Tuesday’s ceremony, with Schumer touting the marriage legislation as an “important step forward” in the march toward equality.

Pelosi, who is stepping down from Democratic leadership, has said she’s “happy” this bill is one of the last she will sign as speaker and became emotional when the measure passed in the chamber.

Pelosi on Tuesday noted the full-circle nature of the legislation, after repealing Don’t Ask Don’t Tell when she was ending her speakership the first time in 2010. Biden gave Pelosi and other lawmakers who worked to get the bill through Congress a shout-out in his remarks.

“This is about respect. This is about taking pride,” Pelosi said, “and it’s about time that we do so at the federal level.”