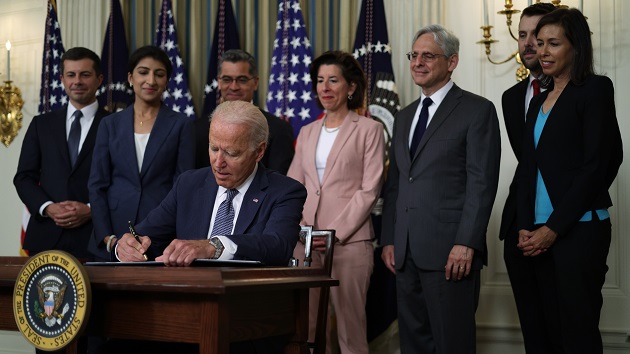 (WASHINGTON) — President Joe Biden signed a wide-ranging executive order Friday afternoon aimed at minimizing the stranglehold of monopolies on certain industries and increasing competition among companies, which the White House believes will benefit consumers by driving down prices.

“For decades, corporate consolidation has been accelerating. In over 75% of U.S. industries, a smaller number of large companies now control more of the business than they did 20 years ago. This is true across health care, financial services, agriculture and more. That lack of competition drives up prices for consumers,” according to a White House fact sheet.

Here is some of what’s in the order:

These items in particular, White House press secretary Jen Psaki said Thursday, are “fulfilling [Biden’s] campaign promise to promote competition in labor markets in order to raise wages and make it easier for workers to change jobs and to move between states.”

The changes won’t be immediately evident to Americans since the executive order merely kicks off longer rule-making and regulatory processes. Some of the executive actions are only recommendations, especially on those areas governed by the FTC and FCC, which are meant to be independent agencies not obligated to carry out White House directives.