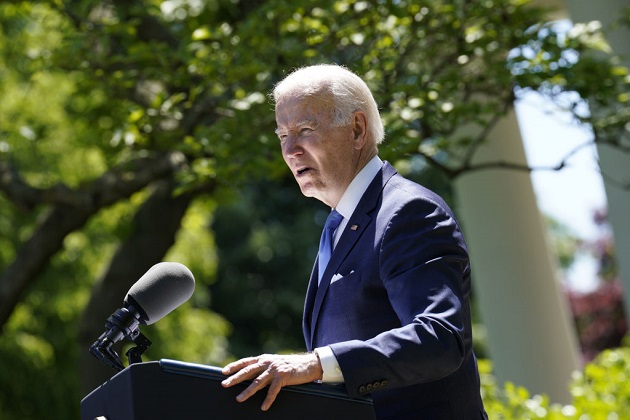 Sitting at his desk in the Oval Office on Monday, President Joe Biden signed the Ukraine Democracy Defense Lend-Lease Act of 2022 into law. The legislation gives Biden the authority to lend or lease defense equipment to Ukraine and other Eastern European nations as Russia’s aggression in the region continues.

“It matters, it really matters,” Biden said as he signed the bill.

A similar lend-lease program was enacted in 1941 to provide pivotal aid to Allied nations in the battle against Nazi Germany. President Franklin Roosevelt said at the time that the U.S. should serve as a “great arsenal of democracy” to defeat Adolf Hitler.

Ukrainian President Volodymyr Zelenskyy said he was “grateful” to Biden and the American people for their support.

“Today’s signing of the law on Lend-Lease is a historic step,” Zelenskyy tweeted. “I am convinced that we will win together again. And we will defend democracy in Ukraine. And in Europe.”

The Ukraine Democracy Defense Lend-Lease Act of 2022 was a bipartisan undertaking, passing the Senate by unanimous consent and the House of Representatives with 417 votes.

Rep. John Katko, a cosponsor of the bill, said the law will “expand our nation’s ability to expeditiously deliver additional defense articles to the Government of Ukraine as they fight back against Vladimir Putin’s barbaric and unlawful invasion.”

“This is a necessary step to protect the future of Ukraine and the safety of its people,” Katko, R-N.Y., added.

“As Ukraine fights for its future — and the future of liberal democracies around the globe — delivering military equipment to the frontlines is paramount,” Shaheen, D-N.H., told ABC News in a statement.

Biden signed the bill just hours after Russia’s commemoration of Victory Day, a holiday celebrating the 77th anniversary of the Soviet Union’s defeat of Nazi Germany. Russian President Vladimir Putin used the occasion to defend his invasion of Ukraine, which began on Feb. 24.

“You are fighting for the motherland, for its future, so that no one forgets the lessons of the Second World War,” Putin said in a speech on Monday.

Putin notably did not make any declaration of war or victory during his remarks.

“On the Day of Victory over Nazism, we are fighting for a new victory,” Zelenskyy said in a video message. “The road to it is difficult, but we have no doubt that we will win.”