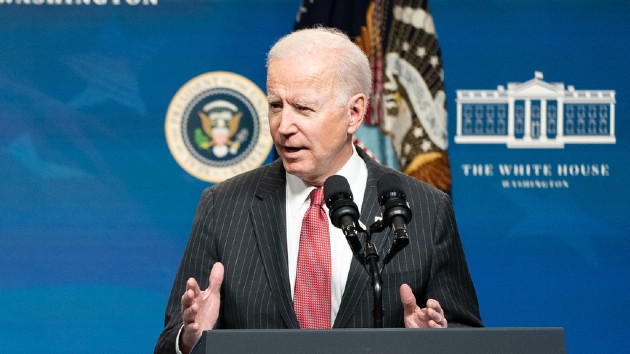 (WASHINGTON) — President Joe Biden will announce a new goal on greenhouse gas emissions Thursday — calling on the U.S., by 2030, to slash emissions by 50-52% from record-high 2005 emission levels.

Biden is set to make the announcement during his global climate summit kicking off on Earth Day, with 40 world leaders taking part in the virtual gathering, including major economies like China, India and Russia.

Administration officials said the announcement was in line with Biden’s aim to meet the goals of the Paris Agreement — to prevent worsening impacts of climate change by dramatically reducing greenhouse gas emissions — and he would pressure other countries to follow suit.

“The United States is not going to wait. The cost of delay are too great and our nation is resolved to act right now,” an official said on a call with reporters.

The administration provided few details about how Biden would meet the target, saying that they see “multiple paths to reach the goals,” and stressed that it would be met economy-wide and not relying on any one sector to do so.

The White House pushed the idea that the policy is a jobs and economic opportunity for the country. Echoing promises made for Biden’s infrastructure bill, the officials said that addressing climate change would mean employing workers to update the electricity grid, close abandoned oil and gas wells, and manufacture more electric vehicles.

“There’s just a tremendous opportunity we have and I think that you’ll hear from the president tomorrow about how focused we are on chasing after the big economic opportunity and the big job creation potential that tackling the climate crisis represents. That’s what this is all about,” an administration official said Wednesday on a call with reporters.

Nathaniel Keohane, senior vice president for climate with the Environmental Defense Fund, said the new goal could put the U.S. in a good economic position to keep up with the climate investments other countries are already making.

“The really big question for the American economy is do we position the United States to compete and win in that new, clean-energy economy? And the most important step to do that is to be a leader here at home. And so I think that’s, you know, fundamentally what this is about,” he said.

The White House said the plan will follow Biden’s previous goals of getting the country to carbon-free electricity by 2035 and a net-zero carbon economy by 2050, in part, by making housing more energy efficient and reducing carbon emissions from transportation.

Transportation made up 29% of greenhouse gas emissions released in the United States in 2019, making it the biggest contributor, followed by electricity use and industrial activity.

As of 2019, the U.S. has reduced greenhouse gas emissions 12% compared to 2005 levels, according to the energy research firm Rhodium Group.

When asked how they settled on the specific 50-52% range, administration officials said they looked at different sectors like energy, transportation and industry and consulted with different federal agencies to determine what goal they would be able to achieve.

The White House did not provide more details about specific policies Biden will pursue to accomplish these goals, but climate policy experts said the government could use incentives on renewable energy and electric vehicles, and regulations to reduce emissions and pollution from industries like oil and gas production.

Biden’s emissions-slashing objective is a sharp contrast from the Trump administration, which withdrew from the Paris Climate Agreement negotiated during the Obama administration.

Climate policy experts said it’s crucial for the federal government to push for the U.S. to transition to cleaner energy and take other steps to reduce emissions, both to support efforts already underway in the country but to also set an example on the international stage.

“Our collective global climate ambitions really need to be brought in sharp focus, we are in a very consequential decade now and this summit is about us — not just being back in the Paris agreement — but coming back with a robust commitment that shows where we’re a responsible country, we’re gonna play our part and we expect other countries to as well,” said Rachel Cleetus, policy director with the climate and energy program with the Union of Concerned Scientists.