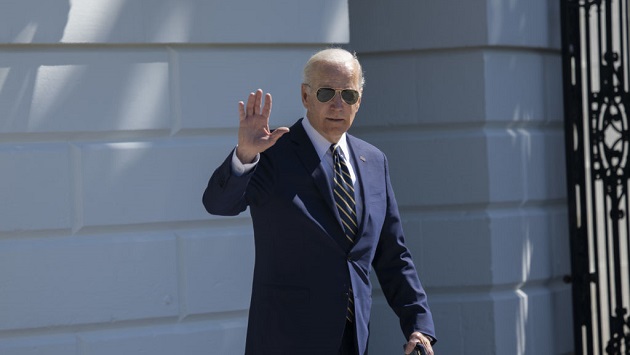 At O’Connor Farms, a family-run farm in Kankakee, Illinois, Biden outlined steps his administration is taking to help farmers ramp up domestic production.

“Right now America is fighting on two fronts,” Biden said. “At home, it’s inflation and rising prices. Abroad, it’s helping Ukrainians defend their democracy and feeding those who are left hungry around the world because Russian atrocities exist.”

Biden continued, “Our farmers are helping both on both fronts, reducing the food cost of price of food at home and expanding production and feeding the world in need.”

To support this cause, the administration will increase the number of counties that can get insurance for double cropping, or planting a second crop on the same land in a single year. It will also double Biden’s pledged funding for the production of fertilizer from $250 million to $500 million.

Jeff O’Connor, the owner of the Illinois farm, said the changes will allow U.S. farmers to “step up at a very critical time.”

“The farming community stands ready to maximize production, which we do so well, in this time of world need,” O’Connor said as he introduced Biden.

Biden’s appearance in Illinois came fresh on the heels of the release of April’s consumer price index — a key measure of inflation. The Bureau of Labor Statistics reported Wednesday morning consumer prices rose 8.3% last month from the year prior, a slight dip from March’s peak of 8.5% but still close to a four-decade high.

The cost of food as well as shelter, airfare and new vehicles were the main contributors to the April statistics, the bureau said.

Gas prices hit a record high on Wednesday of $4.40 per gallon, according to AAA.

“While it is heartening to see that annual inflation moderated in April, the fact remains that inflation is unacceptably high,” Biden said in a statement reacting to the April data. “As I said yesterday, inflation is a challenge for families across the country and bringing it down is my top economic priority.”

Inflation is poised to be one of the biggest issues in the 2022 midterm elections. In bad news for Biden, a recent ABC News/Washington Post poll found most Americans disapprove of his handling of the economic issue.

In anticipation of the new data on consumer prices, Biden on Tuesday delivered remarks on efforts by his administration to combat inflation. His speech also took aim at what he describes as “ultra-MAGA” Republicans, most notably Florida Sen. Rick Scott and his plan to have all Americans pay some federal income tax.

“The Republican plan is to increase taxes on middle class families,” Biden said, despite the fact that Scott’s plan has been dismissed by Senate Minority Leader Mitch McConnell.

After his remarks, Biden was asked by a reporter when the public can expect prices to come down.

“I don’t know, but I know what we have to do to make sure that we can bring it down,” Biden responded.