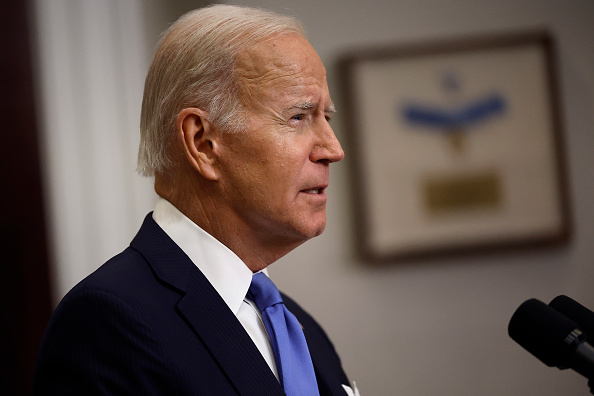 (WASHINGTON) — With Hurricane Ian lashing the southeast U.S. after leaving a path of destruction in Florida, President Joe Biden provided a detailed update Friday on his administration’s response to the devastating storm, calling it now “an American crisis.”

“I’ve directed that every possible action be taken to save lives and get help for the survivors,” Biden said as he spoke from the White House Roosevelt Room. “Every single minute counts. It’s not just a crisis for Florida. It’s an American crisis. We’re all in this together.”

The president said he continued his talks with Florida GOP Gov. Ron DeSantis on Friday morning, reiterating the federal government’s commitment to help his state recover from the storm.

“We’re just beginning to see the scale of that destruction,” Biden said. “It is likely to rank among the worst in the nation’s history. You have all seen on television, homes and property wiped out. It is going to take months, years to rebuild.”

Biden didn’t paint as grim a picture on the death toll as he did on Thursday, when he said early reports indicated “substantial loss of life” and said Hurricane Ian could be the “deadliest hurricane in Florida’s history.”

DeSantis said Friday morning the number of dead from Ian is at least 21, and that it’s expected to grow. For now, the governor said 20 of those deaths are unconfirmed because they were spotted during search and rescue operations and crews were told to prioritize those found alive and still trapped.

Biden emphasized the work of search and rescue teams, stating he deployed the largest team in recent history along with the U.S. Coast Guard’s six fixed-wing aircrafts, 18 rescue boats and 16 rescue helicopters.

Among the missions, Biden said, was rescuing a 94-year-old woman who was hoisted up into a helicopter. The rescue teams also reported saving a 1-month-old baby.

Four more Florida counties will be covered by disaster assistance to cover 100% of the cost to clear the debris left by the hurricane, bringing the total number of counties receiving the aid to 13.

Biden also spoke about the effort to restore power to the millions of Floridians still without electricity on Friday morning. He said 44,000 utility workers and restoration personnel from 33 states are “working around the clock to help get power back on.”

During his update Friday, Biden spoke about the need for unity when responding to these extreme weather events.

Biden and DeSantis have appeared to bury the hatchet as they’ve coordinated this week to respond to Hurricane Ian. The two leaders are political opponents on a number of issues, most recently sparring over DeSantis’ migrant flights.