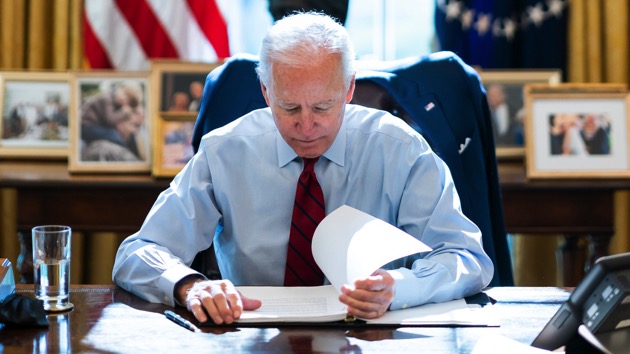 (WASHINGTON) — President Biden weighed in on his hopes for a verdict in the trial of Derek Chauvin for the first time Tuesday, after speaking with George Floyd’s family at the start of jury deliberations.

“I’m praying the verdict is the right verdict, which is — I think it’s overwhelming, in my view,” Biden told reporters in the Oval Office. “I wouldn’t say that unless the — the jury was sequestered now and not hearing me say that.”

Prior to the comment, Biden had been careful not to say whether he thinks Chauvin ought to be found guilty of murder in Floyd’s death.

“We will continue to encourage peaceful protests, but we’re not going to get ahead of the verdict in the trial,” White House press secretary Jen Psaki said Monday when asked about the White House’s preparations for national reaction to a verdict.

But Biden has cultivated a relationship with the Floyd family since George’s death spurred a reckoning on racial injustice in America, calling the family yesterday to check in and convey he was praying for them, according to Psaki.

“I can only imagine the pressure and anxiety they’re feeling. And so, I waited till the jury was sequestered, and — and I called,” Biden said Tuesday. He said he didn’t intend to make the call public, but George’s brother Philonise spoke about the call during a television interview Tuesday morning.

“He was just calling, he knows how it is to lose a family member and he knows that, the process what we are going through. He’s just letting us know he’s praying for us and hoping that everything will come out to be okay,” Philonise said on NBC’s “Today Show,” referring to Biden’s deep empathy for those who have experienced tragedies like the loss of his own wife and two children.

“They’re a good family. And they’re calling for peace and tranquility no matter what that verdict is,” Biden said.

“We just talked a little. I wanted to know how they were doing, just personally,” he added.