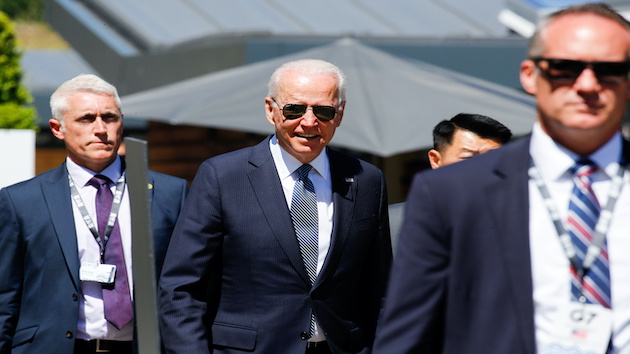 (CORNWALL, England) — President Joe Biden declared that “America is back at the table” Sunday as he concluded his first Group of Seven summit on his first overseas trip as president and prepared to head for Brussels for another round of talks with top allies at a NATO summit.

“America’s back in the business of leading the world alongside nations who share our most deeply held values,” Biden said during a press conference at the conclusion of the G-7 summit.

“I think we’ve made some progress in re-establishing American credibility among our closest friends,” Biden continued, in an indirect reference to his predecessor, former President Donald Trump, who rattled traditional multilateral alliances during his presidency with his “America First” approach to foreign policy.

At the summit’s conclusion Sunday, the member nations issued a joint communique in which they expressed broad agreement and a shared commitment to action on pressing issues, including a commitment to share 1 billion vaccinations with the world, endorsing a global minimum corporate tax rate of 15% and affirming a shared commitment to tackling the climate-change crisis.

The summit did, however, expose a rift in the alliance on how to handle China. While Biden has made countering rising competition from China the cornerstone of his foreign policy focus, some European allies are more open to cooperation.

While the communique did make reference to China, Biden was pressed Sunday on why the language was not more forceful in its tone. Biden downplayed the differences of opinion on China and said he was “satisfied” with the final version, that there’s “plenty of action on China” and to expect “straightforward dealing” from now on.

As Biden continues his trip at the NATO summit in Brussels, Biden is set to continue to draw a contrast with his predecessor, who questioned the utility of the security alliance.

“We do not view NATO as a sort of protection racket. We believe that NATO is vital to our ability to maintain American security for the next — next — the remainder of the century,” Biden said. “I want them to know, unlike whether they doubted whether we believe NATO and Section 5 is a sacred obligation.”

Biden went on to make the case of NATO’s direct security interest to the U.S. in reminding reporters that the alliance’s Article 5 has only once been activated and that was in defense of the United States in the wake of the Sept. 11 attacks.

Following his time in Brussels, which will also include a summit between the European Union and U.S., the president will continue on to his much-anticipated sit-down with Russian President Vladimir Putin in Geneva.

While the president has made clear he won’t hold back in confronting Putin on areas of conflict, he has also said he is not seeking conflict but is instead hoping the in-person meeting can help to stabilize the relationship between the two nations, which both Putin and Biden has said is at a “low point.”

The two leaders are set to have two meetings Wednesday — one with an expanded delegation from each country and a second, more intimate meeting. They will each hold separate press conferences after.

Asked Sunday why not hold a joint press conference with Putin, Biden said this summit is “not a contest” and wants the focus of the summit to be on the substance of the closed-door meetings not diverted by efforts to prove dominance in front of cameras.

“This is not a contest about who can do better in front of a press conference or try to embarrass each other. It’s about making myself very clear what the conditions are to get a better relationship with Russia,” he said. “I don’t want to get into being diverted by, did they shake hands? How far did they — who talked the most and the rest. He can say what he said the meeting was about and I will say what I think the meeting was about. That’s how I’m going to handle it.”

While the U.S. has imposed sanctions on Russia and taken other steps aimed at punishing the Kremlin for aggressive actions toward the U.S., Biden was pressed on Sunday about the reality that Russia hasn’t been significantly deterred to date. Biden expressed a clear-eyed view that there’s never a guarantee to change another actor’s behavior but expressed hope for “accommodation” as Russia faces its own set of challenges.

Asked why he hasn’t changed his behavior yet, Biden briefly laughed and responded “because he’s Vladimir Putin.”

“I’m not going to get into much more than that because I’ve got to sit down with him and I’ll be happy to talk after that,” he continued.