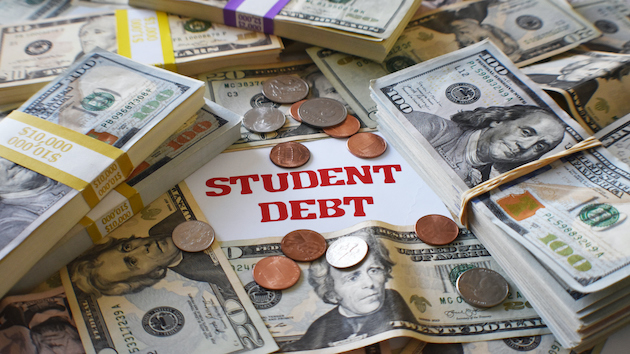 (WASHINGTON) — President Joe Biden is facing backlash for rejecting a proposal to cancel $50,000 in student debt and stating point-blank, “I will not make that happen.”

During a CNN town hall on Tuesday, an attendee asked Biden about Senate Majority Leader Chuck Schumer and Sen. Elizabeth Warren’s proposal to cancel up to $50,000 in federal student debt per borrower.

“It depends on whether or not you go to a public university or a private university,” Biden said.

The president said doesn’t want to forgive the debts of people who attended elite schools such as Harvard and Yale who often go on to make high salaries and added that he would instead prioritize childhood education for disadvantaged communities.

“I’m prepared to write off $10,000 debt, but not 50, because I don’t think I have the authority to do it by signing” an executive order, Biden said.

The president further said that families who make less than $125,000 and whose kids go to a state university should attend for free. He also expressed support for repaying debt as a portion of one’s salary.

However, his comments led to intense criticism.

New York Rep. Alexandria Ocasio-Cortez spoke out against Biden’s comments, tweeting, “Who cares what school someone went to?”

She argued generations of working-class kids are “encouraged to go into more debt under the guise of elitism,” adding, “This is wrong.”

She added that early childhood education doesn’t have to come as a trade-off to student loan forgiveness. “We can have both,” she said.

Massachusetts Rep. Ayanna Pressley also joined the conversation, claiming Biden does have the authority to cancel student debt “with the stroke of a pen.”

“He can and must use it. The people deserve nothing less,” she said.

Minnesota Rep. Ilhan Omar similarly called out Biden, saying, “We also need to make college tuition-free so debt is not accumulated moving forward and invest in universal early education. These are not at odds!”

On Wednesday, White House Press Secretary Jen Psaki noted that Biden has previously said that any relief above $10,000 should be targeted based on the borrower’s income, the kind of debt in question, whether the school is public or private and if it is for undergraduate or graduate education.

“If Congress moves forward and sends him a package that, you know, provides $10,000 of student debt relief, he’d be eager to sign that,” Psaki said.

Schumer and Warren piled on the pressure and issued a joint statement Wednesday, urging Biden to cancel up to $50,000 in debt.

“An ocean of student loan debt is holding back 43 million borrowers and disproportionately weighing down Black and Brown Americans,” the statement said.

“The Biden administration has said it is reviewing options for cancelling up to $50,000 in student debt by executive action, and we are confident they will agree with the standards Obama and Trump used as well as leading legal experts who have concluded that the administration has broad authority to immediately deliver much-needed relief to millions of Americans.”