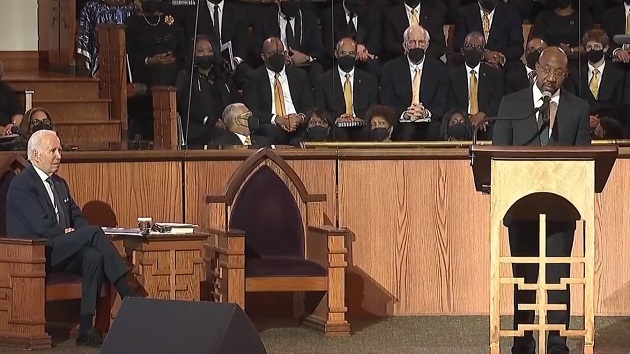 (ATLANTA) — President Joe Biden on Sunday delivered a sermon at Martin Luther King Jr.’s former church in Atlanta, celebrating the late civil rights leader’s life and legacy and reflecting on the progress that Biden said was still left to be made.

Speaking at Ebenezer Baptist Church, where King had preached, Biden spoke on what would have been King’s 94th birthday of what he called an “inflection point” in the country.

The president said that the assassinated preacher and activist’s teachings offer a path forward.

“It’s still the task of our time to make that dream a reality, because it’s not there yet. To make Dr. King’s vision tangible, to match the words of the preachers and the poets with our deeds,” Biden said. “The battle for the soul of this nation is perennial. It’s a constant struggle. It’s a constant struggle between hope and fear, kindness and cruelty, justice and injustice, against those who traffic in racism, extremism and insurrection. A battle fought on battlefields and bridges, from courthouses and ballot boxes to pulpits and protests.”

“At our best, the American promise wins out,” the president said. “At our best, we hear and heed the injunctions of the lord and the whispers of the angels.”

“But I don’t need to tell you that we’re not always at our best. We’re fallible, we fail and fall,” he continued. “But faith and history teach us that however dark the night, joy cometh in the morning.”

Biden’s speech referenced voting rights, which he unsuccessfully sought to expand in the first two years of his term and has vowed to continue focusing on, though it’s unlikely he’ll be able to get legislation through a GOP-controlled House.

“Progress is never easy, but it’s always possible. And things do get better in our march toward a more perfect union,” he said. “But at this inflection point, we know there’s a lot of work that has to continue on economic justice, civil rights, voting rights, protecting our democracy. And I’m remembering that our job is to redeem the soul of America.”

Biden’s sermon on Sunday marked the first time a sitting president had addressed the famed church, and voting rights had been anticipated to be at the fore.

Last year, King’s eldest son, Martin Luther King III, told Biden and members of Congress they needed to use the “same energy” behind passing the bipartisan infrastructure law and other bills to “ensure all Americans have an unencumbered right to vote.”

But it ultimately stalled, despite Biden’s push to change the filibuster rules to get two pieces of national voting rights bills to the finish line.

Some Republicans also criticized Democrats’ voting proposals as allowing the federal government to interfere in states’ authorities on elections.

Biden spoke on Sunday at the invitation of Raphael Warnock, Georgia’s junior senator, who has been the pastor at the church since 2005.

Following his sermon at Ebenezer, Biden will join Rev. Al Sharpton and the National Action Network in Washington on Monday. There, he will deliver the keynote address to commemorate Martin Luther King Day.

“In the last two years, President Biden has shown a relentless commitment to not only upholding but expanding civil rights in the United States,” Sharpton said in a statement. “As we prepare for a pivotal year ahead, with the future of democracy at stake, the National Action Network is thrilled to welcome President Biden to our annual MLK Day Breakfast. I look forward to hearing how we work together in 2023 to ensure we continue Dr. King’s dream for a fairer America.”

Rep. Nancy Pelosi, Martin Luther King III and more will also be in attendance for the National Action Network event.

In a proclamation on the holiday, Biden said King “imagined a different future for America” but that the “work continues because it remains unfinished.”

“On this day of commemoration, service, and action, let us hold up a mirror to America and ask ourselves: What kind of country do we want to be?” Biden said. “Will we honor Dr. King’s legacy by rising together — buttressed by each other’s successes, enriched by each other’s differences, and made whole by each other’s compassion? I believe we can.”