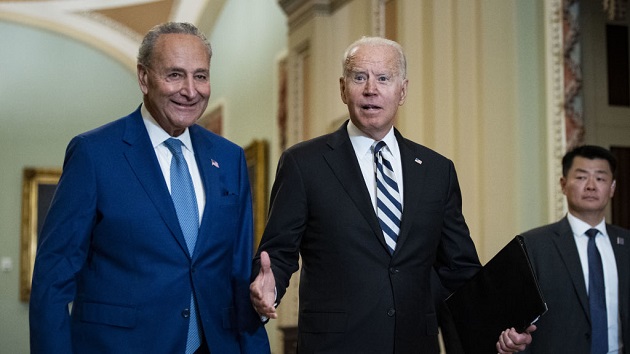 (WASHINGTON) — President Joe Biden lunched with Democrats on Capitol Hill Wednesday as the party proceeds with the delicate task of crafting two separate pieces of legislation worth a combined $4.1 trillion in new spending.

Biden’s attendance at the lunch comes following a late-night announcement from Democratic Senate leaders that they had agreed on a $3.5 trillion budget resolution, the first step in unlocking a process that could allow Democrats to pass some of Biden’s American Families plan priorities without any Republican support.

In an hour-long lunch meeting behind closed doors, Senate Democrats peppered Biden with questions about the new budget blueprint and the $1.2 trillion bipartisan infrastructure package, according to numerous attendees.

Senate Majority Leader Chuck Schumer, along with the chairman of the Budget Committee, Sen. Bernie Sanders, I-Vt., and panel member Sen. Mark Warner, D-Va., who has fought to reign in the broader legislation, walked the president and caucus through the outlines of the $4.1 trillion in proposed new spending.

According to a senior Democratic aide, the budget proposal includes an extension of the child tax credit expansion first carved out in March’s COVID-19 relief bill. Families with children under 6 years old receive $3,600 per year per child under that expansion and families of older children receive $3,000 per child.

The resolution also includes funding for a variety of climate initiatives, support for universal Pre-K, affordable child care, community college and paid family leave, and investments in affordable housing and small businesses, among other provisions.

Sanders said there is also “at least $120 billion” for immigration reform expected in the final product.

To pay for the massive package, Democrats are proposing raising taxes on the wealthy and big corporations, but won’t tax families making under $400,000, the aide said.

Sanders praised the resolution Wednesday as “the most consequential program in modern history of this country,” but the plan does fall significantly short of the $6 trillion he initially insisted on.

One senator who attended lunch with the president said Sanders gave an effusive speech regarding his former rival, saying he never imagined Biden would be “so progressive.”

“It was a freaking lovefest,” the senator told ABC News Congressional Correspondent Rachel Scott of the speech.

During the lunch Sen. Sherrod Brown, D-Ohio, who seriously contemplated jumping into the 2020 Democratic presidential primary, thanked Biden for using the word “union” repeatedly, though the context was not clear, according to the Democratic senator.

“You are the first president in the 30 years I’ve been in Washington that I still like. He said, ‘You haven’t sold us out yet’,” the senator paraphrased Brown as saying.

Biden addressed both the bipartisan and reconciliation infrastructure deals, but most senators were struck by the broader, sweeping message — that the president doesn’t want his neighbors in Scranton, Pennsylvania, being hurt by anything they would do. Sen. Chris Murphy, D-Conn., said Biden “made an incredibly compelling case that this is the moment to go big.”

But not all Democrats are on board with the plan yet, and details of the budget proposal are still coming together.

Sen. Joe Manchin, D-W.Va., told reporters he has a number of concerns with the proposal.

“I’m concerned about inflation. And so I want to see more of the details of what’s going on. I’m concerned also about maintaining the energy independence of the United States of America,” the moderate Democrat said.

And Murphy, a progressive, said he’s concerned that the $3.5 trillion is not big enough, particularly to take care of modernizing the northeastern corridor rail service.

Any single Democratic defection could be a serious obstacle for Democratic leadership. Reconciliation requires a simple majority, which means every Democratic vote plus the tie-breaking vote of Vice President Kamala Harris will be required to move this bill over the finish line.

Republicans have been clear from the onset they won’t support spending beyond the bipartisan infrastructure package being negotiated separately.

“To me that $3.5 trillion that was announced last night really is the extreme Democrats’ freight train to socialism,” said Sen. John Barrasso, the number three Senate Republican. “This is something that they are going to need every Democrat to pass because there is not a single Republican in the House or in the Senate who is going to support this level of taxing and spending.”

Despite the Republican blowback to the budget resolution, members of the bipartisan group working on negotiating the separate, $1.2 trillion bipartisan plan, said they are not concerned about the budget proposal throwing their package off course.

“There are two very different bills that are totally separate tracks — one is bipartisan, responsible, no tax increases, the other is, you know, a huge spending spree at a time when we’re already at record levels of deficit and debt,” said Sen. Rob Portman, R-Ohio, who has been leading bipartisan negotiations on behalf of Republicans. “So I’m concerned about it, but they don’t relate to one another.”

“I think it’s a real mistake what they’re doing but it doesn’t affect us at all,” Portman said.

Sen. Bill Cassidy, R-La., another member of the bipartisan group, said their efforts are “totally separate.”

“They’re not linked, it is going to increase our debt or else increase taxes, but in terms of our effort it shouldn’t have an impact,” he said.

Bill text is not yet available for either the budget deal or the bipartisan infrastructure plan and senators face fast-approaching deadlines, set by Biden, for swift action before the August recess.

Schumer has said he intends to hold a vote on both the bipartisan deal and the budget package before the Senate takes its summer break.