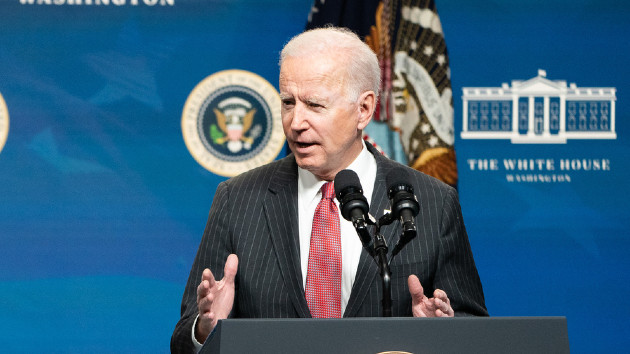 (WASHINGTON) — President Joe Biden is traveling to Oklahoma to commemorate the 100th anniversary of the 1921 Tulsa Race Massacre, putting the national spotlight on one of the worst acts of racial violence in America that was largely whitewashed and omitted from history books.

The president will meet with survivors of the domestic terror attack during his visit to Tulsa on Tuesday, as well as deliver remarks and tour the Greenwood Cultural Center. There, Biden will announce new policies to combat the racial wealth gap and reinvest federal funds in communities.

In his remarks, Biden is slated to announce that the federal government will boost contracting with “small, disadvantaged businesses” by 50%, which would translate to an additional $100 billion over five years, according to senior administration officials who briefed reporters on a call Monday night.

To address racial discrimination in the housing market, Biden is poised to announce an interagency effort to address inequity in housing appraisals. He will also highlight proposals from his infrastructure-focused American Jobs Plan, including a $10 billion community revitalization fund for civic infrastructure projects that officials said would help places like Greenwood.

Biden on Monday issued a presidential proclamation declaring it a “Day of Remembrance: 100 Years After the 1921 Tulsa Race Massacre” and called on Americans “to reflect on the deep roots of racial terror in our nation and recommit to the work of rooting out systemic racism across our country.”

On the evening of May 31, 1921, and into the following day, a mob of armed, white men descended on the all-Black Greenwood neighborhood in Tulsa, destroying 35 blocks of a prosperous community that was known as “Black Wall Street.”

With members of law enforcement and government employees working against Black residents, the state of Oklahoma recorded only 36 deaths, but a 2001 commission reported the number killed was as high as 300. As many as 10,000 residents were displaced or put in internment camps after the massacre was painted as a “riot” to prevent Black businesses from collecting on insurance claims.

No one was ever charged with a crime and the community never recovered.

“The Federal Government must reckon with and acknowledge the role that it has played in stripping wealth and opportunity from Black communities,” the president’s proclamation reads.

Biden’s visit comes as the national conversation on reparations gains new ground. H.R. 40 — a bill which would form a commission to study and develop reparation proposals for African Americans — passed out of committee for the first time earlier this year. It has not been put up for a vote in the House.

In May, three survivors of the massacre made dramatic appeals to lawmakers for reparations. Those survivors and their families last year filed a lawsuit against the city of Tulsa and others demanding compensation for what they called the ongoing “public nuisance” inflicted on them and other families for decades following the attack.

“I still see Black men being shot, Black bodies lying in the street,” recounted Viola Fletcher, 107, to a House Judiciary subcommittee. “I still smell smoke and see fire. I still see Black businesses being burned. I still hear airplanes flying overhead. I hear the screams. I have lived through the massacre every day. Our country may forget this history, but I cannot. I will not, and other survivors do not. And our descendants do not.”

However, it is not clear whether Biden will announce his support for reparations for Black Tulsa massacre descendants, an issue that has long been debated in Oklahoma. Instead, officials reiterated Biden’s support for H.R. 40.

“The president has said, both before he became president and now that he is president, that he supports a study of reparations and he thinks it’s crucial to do that work on an issue as consequential as this one,” a senior White House official said Monday night. “He also knows that we don’t need a formal study on reparations to get to work right now and roll up our sleeves to address systemic racism and invest in Black communities like Greenwood, and he’s starting that process now.”

“We honor the legacy of the Greenwood community, and of Black Wall Street, by reaffirming our commitment to advance racial justice through the whole of our government, and working to root out systemic racism from our laws, our policies, and our hearts,” it said.

Biden, who has acknowledged Black voters helped him win the presidency, has also taken some criticism on the race relations front since assuming office.

He made addressing racial equity a center point of his presidential campaign, calling it one of the four crises facing the country and pledged to implement real reform under his administration, decades after he spearheaded the 1994 crime bill, which led to an increase of mass incarcerations.

But one year after George Floyd was killed by former Minneapolis police officer Derek Chauvin, Biden has not made much headway on police reform as he vowed he would in his joint address to Congress. The announcement that he was visiting Tulsa came on the same day Floyd’s family visited the White House on the anniversary of his death and when Biden had said he’d hoped to sign the policing reform act into law.

One thing that isn’t expected to be part of Biden’s remarks Tuesday is a plan to cancel student loan debt as a way to close the racial wealth gap. Black Americans carry a large percentage of debt compared to others in the U.S. and progressive Democrats have been advocating for the president to see this through.

A senior administration official said, “we are running at every problem as fast as we can” when pressed about the omission.

Tuesday’s anniversary of one the most violent racial acts in American history also comes as the country continues to experience racial violence.

The Department of Homeland Security last week issued an intelligence notice to law enforcement agencies warning that the upcoming events associated with the centennial of the Tulsa Race Massacre “probably are attractive targets for some racially or ethnically motivated violent extremist-white supremacists to commit violence.”

The document, obtained by ABC News, said there are no specific threats that have been detected, but that the threat remains “heightened,” noting “(white supremacists) have committed violence at other mass gatherings and crowded public spaces in recent years with little or no warning.”

And tensions in Tulsa are high.

Protesters gathered over the weekend to call for reparations for the estimated $1.8 million in property loss claims — which advocates say would be more than $25 million in 2021 due to inflation.

On Tuesday, the city will also resume its excavation of a mass grave in Oaklawn Cemetery that experts believe could be connected to the massacre.

Biden’s visit comes nearly one year after former President Donald Trump chose Tulsa for his return to the campaign trail after three months off due to the coronavirus pandemic.

Following widespread backlash, Trump rescheduled his mega-rally from Juneteenth — the holiday commemorating an end to slavery — to June 20, he said, “out of respect.” The city saw a surge in COVID-19 cases following the rally, despite TikTok users’ deliberate attempts to plunge attendance.

Biden will be the first sitting president to visit the historic district of Greenwood to talk about the deadly racial attack.