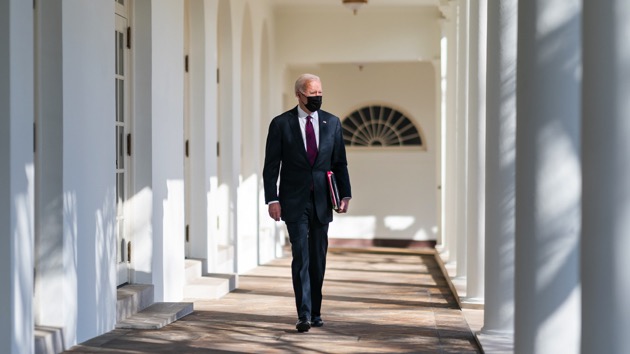 (WASHINGTON) — President Joe Biden’s Irish pride is certainly showing during his first St. Patrick’s Day as president, as he holds a traditional bilateral meeting with the Irish Taoiseach, albeit virtually due to COVID-19.

“St. Patrick’s Day is a particularly special event for President Biden given his Irish heritage,” a senior administration official told reporters on a call, saying the president “is very much looking forward to hosting the Taoiseach for a virtual bilateral meeting.”

Biden was sporting a green tie as he arrived back at the White House on Wednesday from Wilmington, Delaware.

The official stressed that while the meeting is not happening in person this year due to COVID-19, steps were being taken to make sure the virtual visit follows the yearly traditions as closely as possible, including the Taoiseach’s traditional presentation of a bowl of shamrock to the president, dating back to 1952 and President Truman.

The Irish government sent an engraved crystal bowl filled with shamrock to Washington Friday in order to preserve the tradition even in the time of COVID-19, the adviser said.

In addition to the annual shamrock gift, the White House has also paid homage to the holiday by dyeing the water in the North and South Lawn fountains Kelly green, and plans to illuminate the building with green lights this evening.

Biden has perhaps the closest ancestral ties to Ireland of any president since John F. Kennedy, with two of his great-great-grandparents, the Blewitts from County Mayo and the Finnegans from County Louth, having emigrated from Ireland.

Throughout his nearly half-decade in Washington, Biden’s pride about his ties to the Emerald Isle has often been on display, as he developed a penchant for quoting famous Irish poets in his remarks — a habit that has not gone unnoticed.

“My colleagues in the Senate used to always kid me for quoting Irish poets. They thought I did it because I’m Irish. I didn’t do it for that reason. I did it because they’re the best poets in the world,” Biden joked in January, during farewell remarks in Delaware before assuming the oath of office.

“They will also discuss combat and COVID-19 addressing global challenges, including through Ireland’s current seat on the UN Security Council, increasing our shared prosperity and supporting political and economic stability in Northern Ireland,” the official said.

But while the president and vice president will offer their continued support for the Good Friday Agreement, the United States is not looking to take a side in the disagreement over the Northern Ireland Protocol, the provision put in place following Brexit seeking to prevent the need for border controls between Northern Ireland and Ireland, that has been a source of disagreement during its implementation.

“The administration is interested in having strong relations with both the UK and the EU, and we hope that they’re able to wait to find ways to work well together, particularly in the interest of political and economic stability for the people of Northern Ireland.”