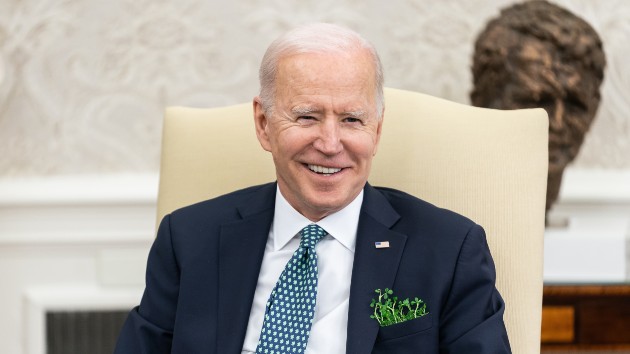 (WASHINGTON) — With the possibility of compromise on an infrastructure package looking slim, President Joe Biden prepared to host a slew of Republican lawmakers at the White House this week — including one, Senate Minority Leader Mitch McConnell, who has said his top priority is blocking Democrats’ agenda.

The White House insists it remains open to compromising on Biden’s $2.3 trillion infrastructure proposal, but at least outwardly, a great gulf remains between his sweeping plan and a counterproposal from a group of Republican senators that tops out at a quarter of the size.

McConnell and the top Republican in the House of Representatives, Kevin McCarthy, will join Senate Majority Leader Chuck Schumer and House Speaker Nancy Pelosi for a meeting with Biden and Vice President Harris at the White House on Wednesday, “to discuss policy areas of mutual agreement,” including infrastructure, according to the White House.

The next day, the president planned to host the Republican senators behind the smaller infrastructure counteroffer.

Biden has repeatedly said he would prefer to work together with Republicans on passing an infrastructure plan.

But he said the same for his signature COVID-19 stimulus package, which ultimately passed Congress in March without a single Republican vote.

GOP opposition on Capitol Hill remains great. McConnell said last week that “100% percent” of his “focus is on stopping this new administration.”

If the president hopes to proceed without Republican support again, he will need every single Democratic vote in the evenly split Senate, including that of West Virginia’s Sen. Joe Manchin, whose more moderate stances and tepid support for Biden’s initiatives have positioned him as a key target for the White House.

On Monday, Biden planned to discuss infrastructure with Manchin at the White House and meet separately with Sen. Tom Carper, D-Del., on the same topic.

Some Democrats, like Senate Budget Committee Chairman Bernie Sanders, say time is of the essence and that Americans do not care if a law has bipartisan backing.

“If Republicans want to come on board, seriously, great,” Sanders said in an interview with Axios. “If not, we’re going to do it alone.”

But fundamental differences remain about what to include in the plan and how to pay for it.

Biden’s proposal includes an expansive definition of what constitutes “infrastructure” — from expanding broadband to providing money for childcare and electric-vehicle charging stations — and suggests taxing corporations to foot the bill. The GOP counteroffer focuses on what Republicans call “core” infrastructure items, like roads and bridges, broadband, airports, waterways, rails, ports and public transit, with user fees instead of corporate tax hikes to fund the investments.

Psaki said Monday that the president was willing to hear ideas on how to pay for his plan — as he has said since he first proposed it — but that “the president’s red lines are inaction and are anything that would raise taxes on people making less than $400,000 a year.”

She suggested there was not much disagreement on the investments that should be included in an infrastructure package, but at least based on both side’s public pronouncements, there are massive gaps.

“The proper price tag for what most of us think of as infrastructure is about six- to eight-hundred billion dollars,” McConnell said in an interview with Kentucky Educational Television that aired over the weekend.

On Thursday, the president plans to host the Republican senator who has led the charge on the GOP counterproposal, Sen. Shelley Capito of West Virginia, along with five other GOP senators: John Barrasso of Wyoming, Roy Blunt of MIssouri, Mike Crapo of Idaho, Pat Toomey of Pennsylvania, and Roger Wicker of Mississippi.

Biden has already spoken on the phone with Capito, who is the most senior Republican on the Senate Environment and Public Works Committee.

Meanwhile, as they discuss a larger package, Democrats and Republicans in the Senate have negotiated over small bills linked to infrastructure, on issues like drinking water and wastewater and economic competitiveness with China.

It remains to be seen how those bills would fit into a larger deal.

For his part, McConnell said he hopes the continued talks with the Biden White House would eventually push positions closer to his own.

“I’m focused entirely on the present and the future, not the past,” McConnell said Thursday in Kentucky. “My view at the moment is we need to turn this administration into a moderate administration. I’m still hoping the administration will pivot to a more centrist position and that’s where I’m spending my time and focus.”