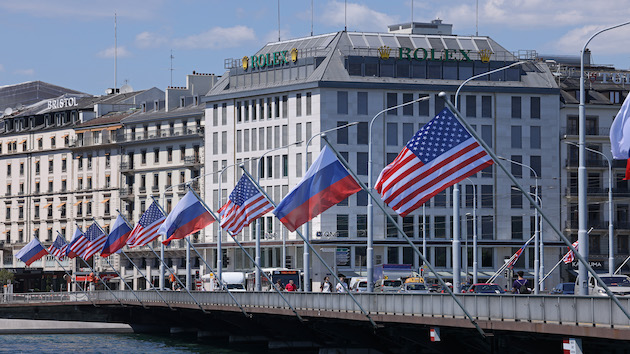 (GENEVA) — President Joe Biden holds a high-stakes summit with President Vladimir Putin, on Wednesday at what the leaders agree is a “low point” in the U.S.-Russia relationship.

The two men will face off inside an 18th century Swiss villa in Geneva, situated alongside a lake in the middle of the Parc de la Grange. The fifth American president to sit down with Putin, Biden has spoken with him and met him before, in 2016.

Having called Putin a “killer” and saying he’s told him before he has no “soul,” Biden told ABC News Chief White House Correspondent Cecilia Vega on Monday that he also recalled the Russian leader as being “bright” and “tough.”

“And I have found that he is a — as they say, when you used to play ball — a worthy adversary,” he said.

Biden arrived in Geneva earlier Tuesday less than 24 hours ahead of his meeting with Putin, scheduled for Wednesday around 7 a.m. ET and expected to last several hours.

Looking to project confidence ahead of the high-stakes summit, Biden didn’t miss a beat during a photo op Tuesday with Swiss President Guy Parmelin.

“Mr. President, are you ready for tomorrow?” a reporter asked.

The meeting with the Swiss president was Biden’s final public event for the day.

When the president arrived earlier in Geneva, he was met with a long line of greeters, many dressed in colorful outfits, as he stepped off Air Force One.

The White House said Biden will hold a solo press conference after meeting with Putin, where he will give his takeaways. Putin plans to do the same.