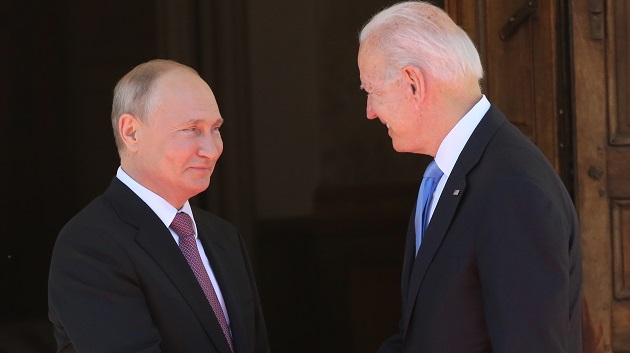 (GENEVA) — After tight smiles and a firm handshake that made for an image both men wanted the world to see, followed by a chaotic photo op and about three-and-a-half hours of tense talks, U.S. President Joe Biden and Russian President Vladimir Putin emerged to spin their summit at dueling news conferences Wednesday.

Both men called their meeting positive, but while Biden said he raised serious concerns and warned of consequences, he did not claim he got Putin to commit to changing his behavior and the Russian leader accepted no responsibility for cyberattacks on the U.S. or for anything else.

Biden had called for the meeting with Putin two months ago, alarmed about Russian aggression toward Ukraine.

Since then, the issue of cyberattacks, including a ransomware strike on an American oil pipeline company that disrupted the nation’s gasoline supply — which the U.S. says was carried out by Russian hackers — has become a key point of contention.

Biden said he made clear that “certain critical infrastructure” is off-limits to attack “period,” saying he gave the Russians a list of 16 American entities and told Putin if the attacks continue, the U.S. was ready to hit back.

“I pointed out to him that we have significant cyber capability, and he knows it,” he said.

Overall, while Putin gained a fresh presence on the world stage, Biden was under pressure to produce what’s being called “deliverables” — concrete results from how he said he would confront Putin — and whether he made met his goal of restoring “stability” and “predictability” to the post-Trump superpower relationship, which both Biden and Putin agreed had reached a “low point.”

Leading up to the meeting, at the G-7 summit, Biden said the world’s democracies were “in a contest with autocrats” while also calling Putin “a worthy adversary.”

Here are some key takeaways:

1) What can be learned from the leaders’ body language?

Both men will likely seize on photos of them looking confident — to project an image of cooling tensions between the two countries.

ABC News Chief Global Affairs Correspondent Martha Raddatz highlighted what she called the “incredible” body language in both the handshake outside the Swiss villa then and inside as they sat down for a photo op. The Russian government was quick to release photos of the two men smiling at each other, appearing to frame the leaders as equals.

“I think President Putin, you saw those pictures of president Putin with President Biden. That’s essentially what he wants right there,” Raddatz said. “The relaxed President Putin sitting back in his chair, Joe Biden looking relaxed as well. All of this is so rehearsed.”

While the photo op of the pair sitting down was chaotic — with Russian security pushing out American press at one point — both leaders appeared relaxed. Biden, who was the first to extend his hand for a handshake inside, sat with his legs crossed, hands in his lap and was seen smiling at several points. Putin leaned back in his chair, as he often does, and looked stoic, yet at ease.

“They know the world is looking at those pictures, especially Vladimir Putin. He wants to be on the world stage,” Raddatz added.

Even with Putin denying Russian involvement in recent U.S. cyberattacks, and his refusal to give any ground on imprisoned opposition leader Alexey Navalny, because relations are at such a point, any signs of progress could be portrayed as a win.

“I think because they have lowered the bar so far, but it’s still a bar, that any progress will be seen as a win according to Joe Biden and probably according to Vladimir Putin, too,” she said.

2) How did each leader characterize the summit and each other?

Putin, the first to deliver a solo press conference following their talks, said there was “no hostility” on either side and even went out of his way to flatter Biden, calling him a “very balanced, professional man.”

“Our meeting took place in a constructive spirit. Indeed, we have arrived at assessments on a number of issues, but both sides expressed their intention to understand each other and to seek common ground. Talks were quite constructive,” Putin said.

Biden also called the summit “positive” and declared it a success at his later news conference, saying, “I did what I came to do.”

Neither leader would bite when asked if they could trust the other.

Biden said, “it’s not about trust.”

“This is about self-interest and verification of self-interest,” he said. “Almost anyone that I would work out an agreement with that affected the American people’s interest, I don’t say, ‘Well, I trust you, no problem. Let’s see what happens.’ You know, as that old expression goes, ‘the proof of the pudding is in the eating."”

Putin said that between presidents “family-style trust” isn’t possible — but, said, there “were flashes of it.”

3) Where did they disagree?

“The bottom line is: I told President Putin that we need to have some basic rules of the road that we can all abide by,” he said.

On the ongoing Russian military aggression toward Ukraine, Putin dismissed the topic, saying it’s not the business of the U.S.

As far as Ukraine joining NATO, which Putin strongly opposes, he said it was “nothing to discuss here.”

Then, there’s the heavy tension over the imprisoned Russian opposition leader.

When ABC News Congressional Correspondent Rachel Scott challenged Putin over why so many of his opponents end up dead or in jail — like Navalny — Putin deflected by bringing up the Jan. 6 Capitol attack, saying Russia “sympathizes” with the U.S. and that it doesn’t want the same to happen in Russia. He falsely suggested those rioters are now being persecuted for their political beliefs.

“It’s not about me fearing anything,” Putin said.

“This man knew he was breaking the law of Russia,” he also said of the “citizen,” repeatedly refusing to call him by name.

Putin also said that neither leader invited the other to Washington or Moscow, saying conditions need to be right for that to happen.

4) What did they agree on — or at least agree to discuss?

The leaders agreed to send their ambassadors back to Washington and Moscow, respectively, in an apparent effort to deescalate tension, though the particulars weren’t announced.

While Biden said there were no direct threats in his meeting with Putin, he also said he was clear in the meeting that the U.S. has “significant cyber capabilities” to respond and telling reporters “this is not a Kumbaya moment” but also that he believes “the last thing he wants now is a Cold War.”

Cybersecurity was a top priority on the U.S. government’s agenda.

Putin said the leaders agreed to “consultations” on the subject.

Regarding the two U.S. Marine veterans jailed in Russia, Trevor Reed and Paul Whelan, Putin said the countries might be possible to find a compromise.

“We discussed it. A certain compromise might be found there. Russia’s foreign ministry and the U.S. State Department will work in that direction,” Putin said.

The White House has separately said this prisoner swap could encourage the Kremlin to target more Americans unfairly like they believe these two Americans there were targeted and “wrongfully” held, Biden noted in prepared remarks at the start if his news conference.

While Biden isn’t going back to Washington with a ton of “deliverables,” he is declaring the trip a success, calling the summit “good” and “positive” overall.

When asked on his way out of his news conference why he was confident Putin will change his behavior, Biden raised his finger at a reporter and asked, “What the hell?… When did I say I was confident?”

Collins followed up noting Biden said earlier it would take “six months to a year” to see if the U.S. and Russia “have a strategic dialogue that matters.”

“What I said was, let’s get it straight. I said what will change their behavior is if the rest of the world reacts to them, and it diminishes their standing in the world. I’m not confident of anything. I’m just stating a fact,” he said.

When she followed up again, Biden said, “If you don’t understand that, you’re in the wrong business.”

“I said what will change their behavior is if the rest of the world reacts to them and it diminishes their standing in the world. I’m not confident of anything. I’m just stating a fact,” Biden continued.

Once he got to the airport, he apologized, and offered for a final time this trip on foreign soil, “America’s back.”

Even as the White House tried to play down expectations beforehand, intense focus will continue on whether there will concrete results out of the summit. The meeting was key to both leaders and their countries — but its historic importance is mostly told in the images — at least for now.