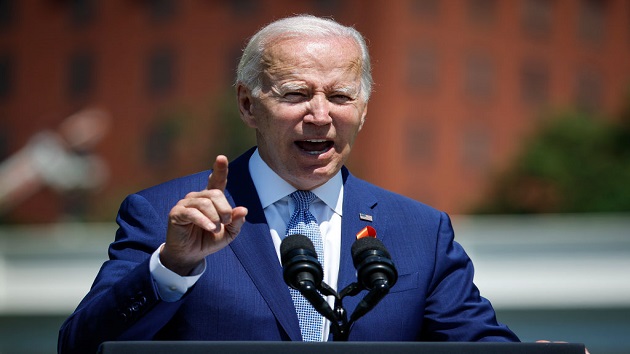 (JEDDAH, Saudi Arabia) — President Joe Biden wrapped up his first trip to the Middle East on Saturday by pledging that the United States will continue to be an engaged partner in the region.

Speaking at the Gulf Cooperation Council in Jeddah, Saudi Arabia, Biden said his administration will support relationships with nations that “subscribe to the rules-based international order.”

“As the world grows more competitive, and the challenges we face more complex, it is only becoming clearer to me how closely interwoven our interests are with the successes of the Middle East,” Biden said. “We will not walk away and leave a vacuum to be filled by China, Russia or Iran.”

Biden on Saturday announced $1B to fight food insecurity in the region, and said the nations present at the summit were collectively contributing billions of dollars on clean energy initiatives.

Biden’s four-day international trip came as the U.S. remains focused on countering China’s rise in the region and uniting global partners against Russia’s invasion of Ukraine.

It also occurred as Biden seeks to lower sky-high gas prices at home. Biden said Saturday the leaders agreed on the need to ensure “adequate supplies” to meet global demand.

After meeting with Saudi Crown Prince Mohammed bin Salman on Friday, Biden said the Saudis “share that urgency” and that he expects to see further action in the coming weeks. But when asked when Americans can see the impacts of that visit, he acknowledged it wouldn’t be immediate.

“I suspect you won’t see that for another couple of weeks,” he said.

Biden faced some criticism for his meeting with Mohammed bin Salman — the man the U.S. believes is responsible for the 2018 murder of journalist Jamal Khashoggi at the Saudi embassy.

Biden and Mohammed bin Salman were photographed fist-bumping each other outside the Al-Salam Royal Palace, three years after Biden vowed as a presidential candidate to make the nation a “pariah” over Khashoggi’s murder.

Hatice Cengiz, Khashoggi’s fiancee, said Khashoggi would have responded to the fist bump by asking the president “is this the accountability you promised for my murder? The blood of MBS’s next victim is on your hands.”

Biden told reporters he raised Khashoggi at the top of their meeting, and continued to condemn his killing as “outrageous.”

Sitting next to Mohammed bin Salman at Saturday’s summit, Biden also touched on the issue of human rights as he laid out his five-point vision for U.S. policy for the region.

“Foundational freedoms are foundational to who we are as Americans,” he said. “It’s in our DNA. But it’s also because we know that the future will be won by the countries that unleash the full potential of their populations, where women can exercise equal rights and contribute to building stronger economies, resilient societies, and more modern and capable militaries; where citizens can question and criticize their leaders without fear of reprisal.”