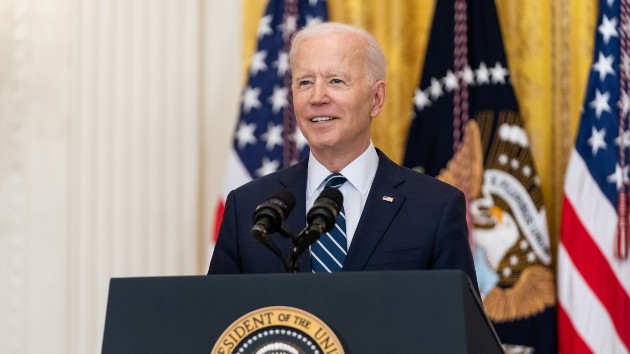 (WASHINGTON) — Despite fighting in the Middle East dominating headlines this week, President Joe Biden plans to keep his focus on Asia Friday when he hosts South Korea’s president at the White House for his second in-person meeting with a foreign leader since he took office.

On the campaign trail and since taking office, Biden has made clear that U.S. competition with China has shaped his view of the world and the fact that his second meeting was with South Korean President Moon Jae-in reflected the emphasis Biden’s administration was putting on Asia. The only other leader Biden has hosted at the White House was from Asia, too: Japanese Prime Minister Yoshihide Suga.

A “significant amount” of Biden’s bilateral meeting with Moon though “will be spent discussing the challenges of” North Korea, a senior administration official told reporters on Wednesday.

The Biden administration recently completed a review of United States’ policy toward North Korea and the White House has said its approach would largely represent a departure from former President Donald Trump’s.

“Our policy will not focus on achieving a grand bargain, nor will it rely on strategic patience,” White House press secretary Jen Psaki told reporters last month. “Our policy calls for a collaborative, practical approach that is open to and will explore diplomacy with the DPRK, and to make practical progress that increases the security of the United States, our allies, and deployed forces.”

Commerce Secretary Gina Raimondo planned to host a roundtable with her counterpart and business leaders from both countries to discuss semiconductors, 5G and other economic issues, the official said.

On Friday, Biden also plans to award the first Medal of Honor of his presidency to a retired colonel for “acts of gallantry and intrepidity” during the Korean War, according to the White House.

Moon is scheduled to attend the ceremony at the White House for retired Col. Ralph Puckett Jr. and it would mark the first time a foreign leader has done so, according to the senior official.