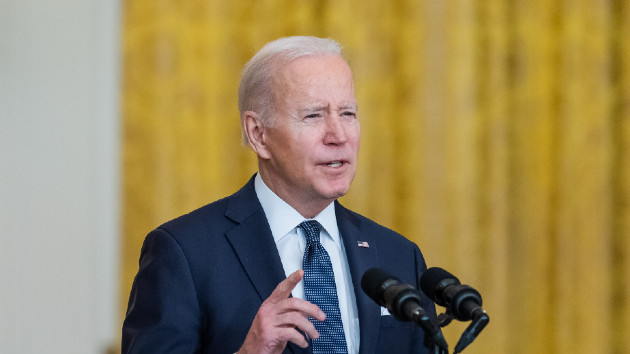 (WASHINGTON) — President Joe Biden announced Tuesday that he pardoned three people who have “demonstrated a commitment to rehabilitation,” including 86-year-old Abraham W. Bolden Sr., who was the first Black Secret Service agent to serve on a presidential detail.

The president also commuted the sentences of 75 people who are currently serving long sentences for non-violent drug offenses.

“America is a nation of laws and second chances, redemption, and rehabilitation. Elected officials on both sides of the aisle, faith leaders, civil rights advocates, and law enforcement leaders agree that our criminal justice system can and should reflect these core values that enable safer and stronger communities,” Biden said in a statement.

Tuesday’s action was the first time Biden used his clemency powers during his presidency and came after advocates and progressive Democrats urged the president to fulfill his long-awaited campaign promise to use his executive authority to address mass incarceration and racial disparities in the criminal justice system, a crisis that was accelerated through policies like the 1994 crime bill, sweeping legislation authored by then-Sen. Biden that experts now say disproportionately impacted people of color.

“My administration will continue to review clemency petitions and deliver reforms that advance equity and justice, provide second chances, and enhance the wellbeing and safety of all Americans,” the president said.

“It’s great that 78 people received clemency in some form today, but it fades into the background of 18,000 petitions pending on the President’s desk,” said Ames Grawert, senior counsel at the Brennan Center for Justice at NYU Law School. “The President needs to come up with a system for ensuring that those thousands of petitions receive a careful and thorough review and the attention they deserve. It’s not clear to me that the current process is up to the task.”

In addition to the clemency actions, the Biden administration released plans to expand economic opportunities and ease reentry for formerly incarcerated individuals.

The myriad of new measures include a $145 million investment in job training programs for convicted felons in Bureau of Prison facilities, which will be done through collaboration between the Department of Justice and the Department of Labor. The administration also plans to expand employment opportunities post release, access to small business loan investments, as well as higher education.

Analysis from a 2017 report from the National Reentry Resource Center reveals that evidence-based reentry policies and programs have been shown to improve the outcomes of formerly incarcerated individuals.

“The actions we’re taking today will have a real impact for someone trying to land a job, find a safe and affordable place to live with their children and get back on their feet,” Susan Rice, Domestic Policy Advisor for the Biden administration, said while praising the new measures during a White House Roundtable with formerly incarcerated Americans.