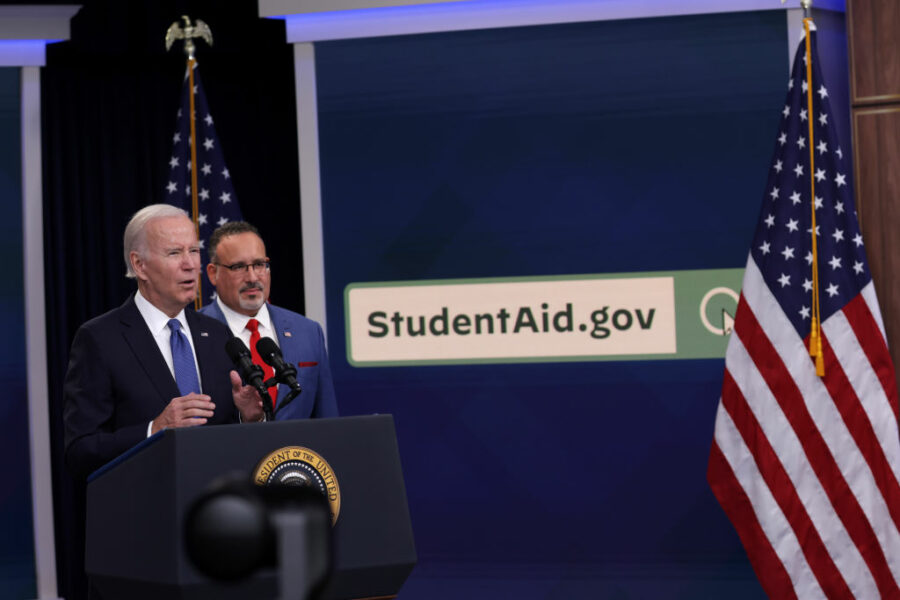 (WASHINGTON) — President Joe Biden on Monday officially launched the application for student loan relief, after the test version of the site went live this weekend — a long-awaited first step to fulfilling one of his campaign promises just weeks before the midterm elections.

“Today marks a big step among others that my administration is taking to make education a ticket to the middle class,” Biden said.

“A new student loan application is now open. If you have federal student debt please visit student aid.gov. It’s easy, simple and fast. And it’s a new day for millions of Americans all across our nation,” he said.

Secretary of Education Miguel Cardona said after the Monday briefing that over 8 million borrowers have already applied for loan forgiveness through the “beta” — or test — version of the application, launched on Friday.

The rollout is a much-anticipated move to accomplish Biden’s August announcement that individuals with student loans making less that $125,00 can apply for up to $10,000 of debt relief, or as much as $20,000 for eligible borrowers who were also Pell Grant recipients.

Borrowers who submitted their applications for the student debt relief program during the beta test period won’t need to reapply now that the application is officially launched, according to a department spokesperson.

“As millions of people fill out the application. We’re going to make sure the system continues to work as smoothly as possible so that we can deliver student loan relief for millions of Americans as quickly and as efficiently as possible,” Biden said on Monday.

“My commitment was, if elected president, I was going to make government work to deliver for the people. This rollout keeps that commitment, just as I’m keeping my commitment to relieve student debt as borrowers recover from this economic crisis caused by the once in a lifetime pandemic.”

Biden also acknowledged the Republicans who are seeking to block the new relief.

“The Biden bailout is not only unfairly punishing Americans, but it is a political loser for Democrats this November. While Biden gives the wealthy a handout, his agenda has slammed families with rising gas prices, sky-high grocery bills, and tax hikes,” Republican National Committee spokesperson Nathan Brand said in a statement after Biden’s Monday announcement.

The policy has been challenged multiple times in court, largely by conservative organizations and states that argue that the Biden administration doesn’t have the authority to cancel student loan debt — that it’s up to Congress.

“Republican members of Congress, Republican governors are trying to do everything they can to deny this feat, even to their own constituents. As soon as I announced my administration’s student debt plan, they started attacking it, saying all kinds of things. Their outrage is wrong, and it’s hypocritical,” he said.

So far, none of the lawsuits has halted the program, which the Biden administration argues is on firm legal footing under the HEROES Act — an act that provides broader-than-usual authority to the Education Secretary during emergency periods, such as COVID. Biden said it’s his administration’s legal judgment that the relief program will not be blocked.

Biden noted that many of the GOP members who have opposed the policy have benefited from other COVID-related relief programs, like the Paycheck Protection Program or American Rescue Plan loans.

“As soon as I announced my administration’s student debt plan, they started attacking it, saying all kinds of things. Their outrage is wrong, and it’s hypocritical. I will never apologize for helping working Americans and middle class people as they recover from the pandemic,” he continued.

“I don’t want to hear from Republican officials again, who heard who had hundreds of thousands of dollars, even millions of dollars in pandemic relief loans, PPP loans, but who now attack the work the middle class Americans are getting relief,” Biden said.

The federal student loan forgiveness plan will cost $400 billion over 10 years, according to a revised estimate in late September from the Congressional Budget Office, which is a lower number than from one leading outside estimate.

“In total, more than 40 million Americans can stand to benefit from this relief, and about 90 percent — 90 percent of that relief is going to go people making less than $75,000 a year,” Biden said. “Let me be clear: Not a dime will go to those in the top 5 percent of the income bracket. Period.”

Biden said on Monday that the country is “on track” to reducing the federal deficit by $1 trillion this fiscal year, along with reducing it by another $300 billion over the next ten years because of a provision in the Inflation Reduction Act that allows Medicaid to now negotiate drug prices with corporations.

“We’re able to afford this student loan relief,” Biden claimed. “It’s because of our historic deficit reduction that Republicans voted against.”

He also said there would be federal income from the borrowers who do not qualify for the loan forgiveness program who will need to begin paying their loans when the payment pause discontinues this January. “That means billions of dollars a year will start coming into the U.S. Treasury,” Biden said.

“My administration’s plan is economically responsible.”