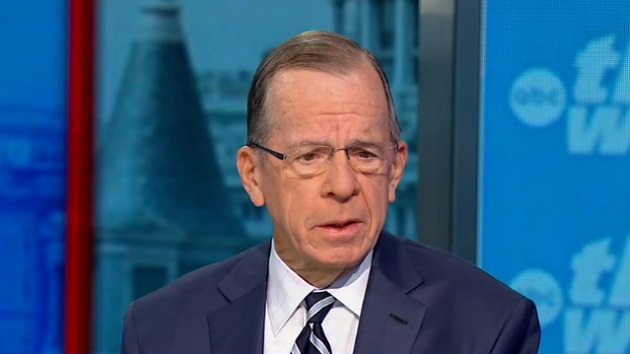 Mullen, the chairman of the Joint Chiefs of Staff under Presidents George W. Bush and Barack Obama, was asked in an interview on ABC’s “This Week” to assess the nuclear risk from Russia after Putin said he would use “all available means” to protect what he called his country’s territorial integrity.

“President Biden’s language — we’re about at the top of the language scale, if you will. And I think we need to back off that a little bit and do everything we possibly can to try to get to the table to resolve this thing,” Mullen told “This Week” co-anchor Martha Raddatz.

Mullen was referring to what Biden said on Thursday when he warned that for the “first time since the Cuban missile crisis, we have the direct threat of the use of a nuclear weapon if in fact things continue down the path that they are going.”

“I don’t think there’s any such thing as the ability to easily [use] a tactical nuclear weapon and not end up with Armageddon,” Biden said then.

The White House has since clarified that the president was not acting on new intelligence of looming danger but was trying to underline the stakes given the current conflict in Ukraine, where Ukrainian forces have recaptured ground in the country’s contested eastern and southern regions and have pushed back Russian troops.

On “This Week,” Raddatz pressed Mullen on his proposed resolution: “How do you see him [Putin] saving face if he doesn’t come to the table? If Ukraine can’t figure anything out?”

Diplomacy and international pressure on both Ukraine and Russia would ultimately be key, Mullen argued.

“It’s got to end and usually there are negotiations associated with that,” he said. “The sooner the better, as far as I’m concerned.”

Putin is “pretty well cornered and boxed in,” Mullen said. And potential use of tactical nuclear weapons could cause problems for Russia’s president at home: “The winds all blow back onto Russia, so he would have to, in a way, contaminate his own country.”

Raddatz opened Mullen’s interview Sunday by having him respond to John Kirby, a spokesman for the White House National Security Council, who also went one-on-one with Raddatz on Sunday.

Kirby said that the Biden administration’s strategy against nuclear threats from North Korea was both to ensure the U.S. can “defend our national security interests” and to pursue direct talks with Kim Jong Un’s regime to denuclearize the region.

“Do you see any strategy differences? Do you see anything that’s going to work?” Raddatz asked Mullen in light of Kirby’s comments.

“I believe for some time that the path to any resolution of this has got to go through Beijing — pressure brought on by Xi Jinping, with respect to dealing with Kim Jong Un,” Mullen said, referring to China’s leader. “I’m fine with us negotiating directly, if that’s what Kim Jong Un wants to do.”

“Is denuclearization really realistic at this point?” Raddatz asked.

“I think sometimes we lose perspective on how devastating these weapons are. And I think we need to do everything we possibly can to the extreme to make sure that that still is a possibility,” Mullen said. “And I’m just not willing to admit that it isn’t yet. I know it’s difficult.”

Raddatz cited Mullen’s view in 2017 that North Korea had increased the possibility of nuclear war to a historic high. “How about now?” she asked.

“I think in the end it comes down to will he [Kim] ever use it? And I just don’t know the answer to that,” Mullen said. But he was concerned: “I think it’s more possible than it was five years ago.”