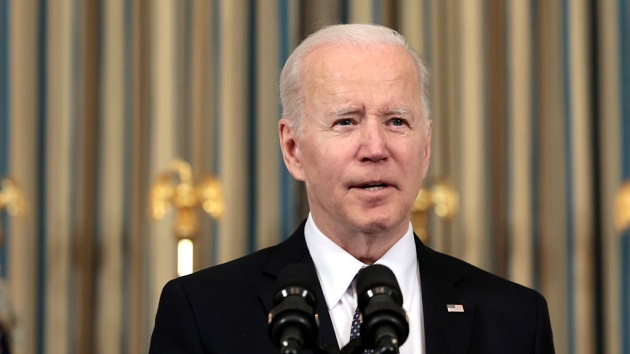 (WASHINGTON) — President Joe Biden appeared to want to both ways when he fielded a barrage of questions Monday asking him to clarify his remarks that Russian President Vladimir Putin “cannot remain in power.”

He stood by his words “expressing moral outrage” but also clarified that the U.S. is not supporting regime change in Russia.

In a rare move for the White House, Biden — who made the apparently unscripted comment in Poland on Saturday — took questions from reporters Monday afternoon at an event unveiling his latest budget proposal, which includes $6.9 billion to help Ukraine fight Russian aggression.

The first question to Biden was: “Do you believe what you said, that Putin can’t remain in power, or do you now regret saying that? Because your government has been trying to walk that back, did your words complicate matters?”

Pres. Biden says he was not “articulating a policy change” when he said Russian President Vladimir Putin “cannot remain in power.”

“I was expressing the moral outrage that I feel and I make no apologies for it.” https://t.co/fkOQn5T5Lj pic.twitter.com/2wmnvZBDds

“Number one, I’m not walking anything back. The fact of the matter is I was expressing the moral outrage I felt toward the way Putin is dealing and the acts of this man just — brutality, half the children in Ukraine. I had just come from being with those families, and so — but I want to make it clear, I wasn’t then nor am I now articulating a policy change. I was expressing the moral outrage that I feel, and I make no apologies for it,” Biden said.

Biden went on to say that he does not think the comment complicates the diplomacy of this moment.

“The fact is that we’re in a situation where it complicates the situation at the moment is the escalatory efforts of Putin to continue to engage in carnage. The kind of behavior that makes the whole world say, ‘My God, what is this man doing?’ That’s what complicates things a great deal and — but I don’t think it complicates it all,” Biden added.

“I was expressing my outrage. He shouldn’t remain in power. Just like, you know, bad people shouldn’t continue to do bad things. But it doesn’t mean we have a fundamental policy to do anything to take Putin down in any way,” Biden said.

“Given his behavior, people should understand that he is going to do what he thinks he should do, period. He’s not affected by anybody else including, unfortunately, his own advisers. This is a guy who goes to the beat of his own drummer. And the idea that he is going to do something outrageous because I called him for what he was and what he’s doing, I think is just not rational,” Biden said.

He told Bruce that another meeting with Putin, “depends on what he wants to talk about.”

Asked why he made the comment closing out his four-day alliance-building trip that was not in his prepared remarks, Biden said he was “talking directly to the Russian people.”

Pressed further, Biden repeated he was “expressing the moral outrage I felt toward this man” and “wasn’t articulating a policy change.”

“The last part of the speech was talking to the Russian people, telling them what we thought. I was communicating this to not only the Russian people but the whole world. This is — this is just stating a simple fact that this kind of behavior is totally unacceptable. Totally unacceptable. And the way to deal with it is to strengthen and put — keep NATO completely united and help Ukraine where we can.”

Biden told reporters Sunday evening he was not calling for Putin’s removal from office, after the White House and some Democrats scrambled to explain the president was not endorsing regime change in Russia as a policy goal.

“The president’s point was that Putin cannot be allowed to exercise power over his neighbors or the region. He was not discussing Putin’s power in Russia, or regime change,” a White House official said after the speech.

“I think the president, the White House made the point last night that, quite simply, President Putin cannot be empowered to wage war or engage in aggression against Ukraine or anyone else,” said Secretary of State Antony Blinken on Sunday. “As you’ve heard us say repeatedly, we do not have a strategy of regime change in Russia or anywhere else, for that matter. In this case, as in any case, it’s up to the people of the country in question. It’s up to the Russian people.”

Putin’s allies, meanwhile, have appeared to take the comment as escalatory rhetoric, and the fallout could undermine diplomatic efforts to end the war.

“That’s not for Biden to decide. The president of Russia is elected by Russians,” said Kremlin spokesperson Kremlin Spokesman Dmitry Peskov.

Biden also called Putin a “butcher” over the weekend, prompting some world leaders to distance themselves from the rhetoric, with France’s Emmanuel Macron saying, “I wouldn’t use this type of wording.”

The dustup comes as recent polls have shown growing frustration with Biden’s handling of Ukraine, even while most Americans favor specific steps the president has taken. According to recent ABC News/Ipsos data, 70% of Americans disapprove of Biden’s handling of gas prices, for instance, though even more respondents — 77% — support his proposal to ban Russian oil, even if it means paying more at the pump.

Biden has stepped up his rhetoric in recent weeks as the fighting in Ukraine has worsened. At least twice in the last month, he has called the Russian president a “war criminal,” adding he thinks Putin “will meet the legal definition.” The State Department announced last week Russian forces have committed war crimes in Ukraine but did not specially name Putin.