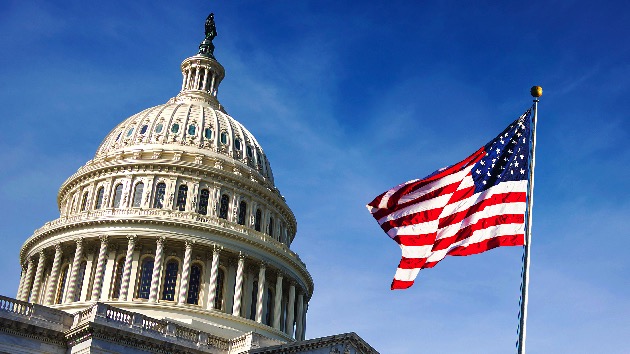 (WASHINGTON) — In a last-minute push before heading overseas, President Joe Biden headed to Capitol Hill Thursday morning to try to get all Democrats behind his social spending and climate policy agenda.

On a call with reporters, senior administration officials laid out the framework of a $1.75 trillion social spending package President Biden will present to House Democrats, including skeptical progressives.

“The president believes this framework will earn the support of all 50 Democratic senators, and pass the House,” an administration official said.

Biden pulled up to the Capitol shortly after 9 a.m., flanked by House Speaker Nancy Pelosi, responding only with “It’s a good day” to a reporter asking what his message is to House progressives who don’t trust Democratic Sens. Joe Manchin and Kyrsten Sinema who have been holdouts throughout the extended and often chaotic bargaining.

As he headed to the closed-door meeting, ABC News Congressional Correspondent Rachel Scott asked, “Mister President, do you have a deal?” but Biden merely waved and said “How are you? Good to see you all.”

When reporters started shouting, “Do you think you have enough of a framework to get progressives to support the infrastructure bill?” Biden responded “Yes.”

The White House said he would give the nation an update on his domestic agenda before his international trip in a speech from the White House East Room at 11:30 a.m., saying he is “delivering” on his promises to rebuild the middle class.

“After hearing input from all sides and negotiating in good faith with Senators Manchin and Sinema, Congressional Leadership, and a broad swath of Members of Congress, President Biden is announcing a framework for the Build Back Better Act,” said a White House statement that notably did not say he had an agreement.

“President Biden is confident this is a framework that can pass both houses of Congress, and he looks forward to signing it into law. He calls on Congress to take up this historic bill – in addition to the Bipartisan Infrastructure Investment and Jobs Act – as quickly as possible,” the statement said.

The White House said, “the framework will save most American families more than half of their spending on child care, deliver two years of free preschool for every 3- and 4-year-old in America, give more than 35 million families a major tax cut by extending the expanded Child Tax Credit, and expand access to high-quality home care for older Americans and people with disabilities.”

The Child Tax Credit expansion, which Biden has proposed extending until 2025, would now be only until the end of 2022. Paid family and medical leave, which Biden had originally proposed be 12 weeks and then scaled back to four weeks, appeared to have been dropped altogether after Manchin objected, despite progressives fighting back. Two free years of community college that Biden had promised is not included.

It also claimed it represents “the largest effort to combat climate change in American history” and “the biggest expansion of affordable health care coverage in a decade,” saying it would “reduce premiums for more than 9 million Americans by extending the expanded Premium Tax Credit, deliver health care coverage to up to 4 million uninsured people in states that have locked them out of Medicaid, and help older Americans access affordable hearing care by expanding Medicare.”

An expansion of Medicare to cover dental and vision, a top priority of Sen. Bernie Sanders, is not in the framework.

And, the White House said, “it is fully paid for … by making sure that large, profitable corporations can’t zero out their tax bills, no longer rewarding corporations that shift jobs and profits overseas, asking more from millionaires and billionaires, and stopping rich Americans from cheating on their tax bills.”