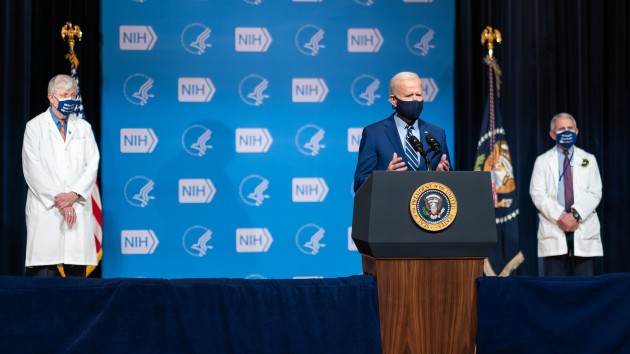 (WASHINGTON) — Despite calls for national unity and bipartisanship, President Joe Biden and his top aides have declined to give the Trump administration credit on the nation’s COVID-19 vaccine rollout while relying heavily on a system established by their predecessors.

The public slight appears to have irked the former president, along with his retired aides who told ABC News they are baffled at the political jabs in what was supposed to be a nonpartisan effort to vaccinate America.

While Trump’s statement is an exaggeration — development of the vaccine itself was largely a feat of private industry — it’s true that many of Biden’s public “wins” on the vaccine, including expanding supply and distributing doses to local pharmacies, are tied directly to efforts initiated by policy aides working under Trump before he left office. The new administration though has accelerated the rollout with an eye on inequities in the nation’s health care system.

“We’re delighted that more Americans are getting the vaccine,” said Paul Mango, former deputy chief of staff for policy at Health and Human Services under Trump.

“We just don’t understand why they (the Biden administration) have to celebrate it by trashing what we did,” he said.

For its part, the White House has bristled at the suggestion that it should give credit to the former president, who personally used his power in office to downplay the dangers of the virus and politicized mask wearing.

“I don’t think anyone deserves credit when half a million people in the country have died of this pandemic,” said White House press secretary Jen Psaki.

Here’s a look at what’s reality and what’s spin:

Biden insists he inherited ‘a mess,’ but the Trump vaccine rollout is a playbook he’s mostly stuck with

Biden and his top aides have repeatedly accused the Trump administration of having “no plan.”

“We’re moving in the right direction, though, despite the mess we inherited from the previous administration, which left us with no real plan to vaccinate all Americans,” Biden said in a Feb. 25 speech.

“The bad news is there really was no plan to ramp up the supply of those vaccines,” he said.

Those statements though aren’t entirely accurate. While Biden has purchased additional vaccine supply, it was always expected that Pfizer and Moderna would ramp up their supply throughout the year.

Also, Biden’s playbook for vaccine distribution has relied heavily on a system created by the Trump administration, including federal partnerships with state officials and agreements with local pharmacies. In fact, the federal pharmacy program created by Trump aides is what Biden relied on last week to expand eligibility to teachers.

And when Biden called for “100 million shots in 100 days” — a pace of about one million shots per day — former health officials noted that the U.S. had already hit that pace the week of Biden’s inauguration in mid January.

“Of course we had a plan, and of course we executed on that plan, and that’s why we are where we are,” Adm. Brett Giroir, who served as assistant secretary for health and as COVID-19 testing coordinator under Trump, said in an interview.

Mango said a major challenge for the Trump administration was getting supply and distribution channels up and running in the first place.

“To say that there was no plan — it’s just completely disingenuous,” said Mango.

Biden shored up supply, but he did it using Trump-era contracts

When Biden took office, it’s true that the U.S. government hadn’t ensured that it would have enough supply to cover every adult with vaccines already authorized by federal regulations.

But that’s in part because Trump officials last year were eyeing a third vaccine — Johnson & Johnson — that only required one shot, was easier to handle and was on the cusp of authorization.

Under Trump, the U.S. agreed to buy enough doses for 200 million adults from vaccine makers Pfizer and Moderna with “options” to buy more if necessary. It also had purchased enough J&J vaccine to buy supply for 100 million adults once authorized — enough supply to cover every U.S. adult by summer.

Biden though didn’t want to take any chances. The new president quickly exercised contract options with Pfizer and Moderna to boost supply to cover 300 million adults. And after J&J got the green light from the Food and Drug Administration in February, he worked with industry officials to try to accelerate its delivery timeline.

The result was Biden’s announcement that he secured enough doses of authorized vaccines for all U.S. adults by the end of May — two months earlier than planned. On Wednesday, Biden announced he wants another 100 million J&J doses to be delivered by the end of the year for “maximum flexibility.”

With three vaccines now authorized by regulators, shoring up supply is indeed a victory. But it’s also one that Biden has celebrated as solely his administration’s achievement without acknowledgement that he was relying on Trump-era contracts to get it done.

“When we came into office, the prior administration had contracted for not nearly enough vaccine to cover adults in America. We rectified that,” Biden said in a March 2 speech.

What is new under Biden are more than a dozen mass vaccination sites managed by the Federal Emergency Management Agency with special attention paid to hard-hit and vulnerable communities.

Also under Biden, hundreds of military medical and support personnel have been sent to assist FEMA-run vaccination sites.

Julie Morita, executive vice president of the Robert Wood Johnson Foundation and a former adviser to the Biden transition, said there’s no doubt that positive steps were taken during the Trump administration.

“The strength now is the coordination and support and increased emphasis on equity, getting shots to the communities who have been hit hardest by the pandemic,” she said. “And that’s more evident now than it was previously.”

Dr. Rich Besser, who served as acting director of the Centers for Disease Control and Prevention under President Barack Obama, said Trump’s “Warp Speed” program to develop the vaccine was a “bold approach” and certainly deserves credit. He also noted the hyper-partisanship surrounding the program when Biden took office.

“This pandemic has been more politicized than any public health response I’ve ever seen,” said Besser.

“Books will be written and arguments will be held over who gets credit for what,” he added. “From my perspective, what matters is the lives are being saved.”

Biden heads to Europe amid domestic turmoil over abortion, guns

Trump’s focus on 2020 election got in the way of COVID response during deadly winter, Birx says

Stunning details you might have missed from Thursday’s Jan. 6 hearing on Trump’s pressure campaign against DOJ