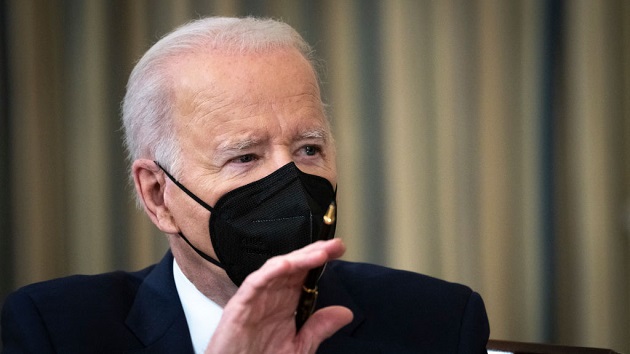 (WASHINGTON) — President Joe Biden on Wednesday declined to expand on reports Justice Stephen Breyer would be retiring from the Supreme Court at the end of the current term, saying he would wait to speak further until the justice personally announces his plans.

“Every justice has the right and opportunity to decide what he or she is going to do, announce it on their own. There’s been no announcement from Justice Breyer. Let him make whatever statement he’s going to make, and I’ll be happy to talk about it later,” Biden said.

Breyer, the most senior member of the U.S. Supreme Court’s liberal wing and staunch defender of a nonpartisan judiciary, stepping down from the bench fulfills the wish of Democrats who lobbied for his exit and for Biden’s first high court appointment.

The vacancy now paves the way for Biden to nominate a Black woman to the court — a historic first and something he promised during the 2020 campaign.

Biden’s first public appearance since the news was at an afternoon White House event with American business executives to discuss his stalled Build Back Better agenda.

Several progressive House lawmakers have already amped up the pressure on Biden with Reps. Ayanna Pressley, D-Mass., Cori Bush, D-Mo., and Jamaal Bowman, D-N.Y., all reminding Biden on Twitter of his promise to elevate a Black woman to the position.

When reporters followed up with the president on Wednesday, Biden added, “I’ll be happy to talk about this later. I’m gonna get into this issue.”

“It has always been the decision of any Supreme Court Justice if and when they decide to retire, and how they want to announce it, and that remains the case today,” she said.

Senate Majority Leader Chuck Schumer, in a statement, said the Senate is prepared to move to confirm Biden’s nominee to fill the Supreme Court vacancy with “all deliberate speed.”

“President Biden’s nominee will receive a prompt hearing in the Senate Judiciary Committee, and will be considered and confirmed by the full United States Senate with all deliberate speed,” he wrote in a statement.

Sen. Dick Durbin, D-Ill., who chairs the Senate Judiciary Committee, which holds hearings for court nominees, said in a statement that the vacancy presents Biden “the opportunity to nominate someone who will bring diversity, experience, and an evenhanded approach to the administration of justice” and that he looks forward to moving the nominee “expeditiously through the Committee.”

Republican Sen. Lindsey Graham of South Carolina reacted to the news with a reminder that Democrats — having the slimmest of majorities in the Senate — still have the ability to pass Biden’s nominee without Republican support. Sen. Mitch McConnell, as majority leader in 2017, lowered the threshold to break the Senate filibuster from 60 votes to 51 votes for Supreme Court nominees in order to pass former President Donald Trump’s first pick.

“If all Democrats hang together – which I expect they will – they have the power to replace Justice Breyer in 2022 without one Republican vote in support. Elections have consequences, and that is most evident when it comes to fulfilling vacancies on the Supreme Court,” Graham said in a statement, in a nod to the 2020 Senate elections in Georgia which Democrats won.

Progressive activists had put unprecedented public pressure on Breyer, who was nominated in 1994 by President Bill Clinton, to retire. McConnell said in June that the GOP may try to block a Democratic nominee to the court if the party wins control of the Senate in November and a vacancy occurs in 2023 or 2024.