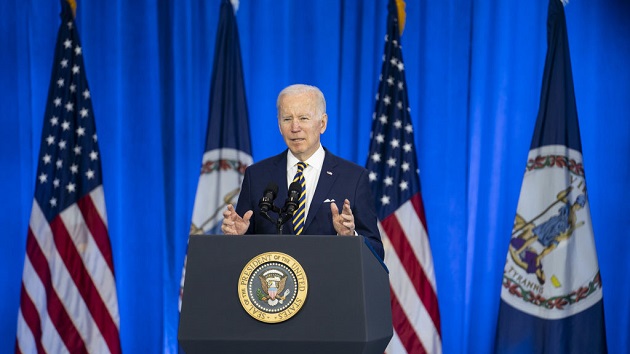 (WASHINGTON) — Ahead of his promised intent to name his nominee to the Supreme Court by the end of the month, and sticking to his pledge to name the court’s first Black woman, President Joe Biden has indicated to Senate Democrats he will start interviewing prospective candidates for the upcoming vacancy next week, according to two sources with direct knowledge of the meeting.

Emerging from a meeting with Biden on Thursday, Senate Judiciary Chairman Dick Durbin, D-Ill., said they are all “anxious to get started” with the process and confirmed that Biden would be “going to take up a meeting with the nominees soon.” Sen. Sheldon Whitehouse, D-R.I., added they’re “aware of the historic nature of this appointment,” and Richard Blumenthal, D-Conn., said that whomever Biden names will give Republicans “no choice” but to support her nomination.

“I came away from this conversation looking forward more than ever, to bipartisan support because I think the president will nominate someone of such compelling personal story, of character and intellect that Republicans will have no choice in effect, but to support her in some number,” Blumenthal said.

Biden and Harris also told the Senate Democrats, according to a White House readout, that there are a “wealth of extraordinarily qualified potential nominees under consideration” and that “any of the candidates” under review would be “deserving of bipartisan support.”

In an interview with NBC’s Lester Holt taped Thursday, Biden said he’s done a “deep dive” on “about four people” who have already seen “thorough background checks” as he keeps an eye on replicating the qualities of Justice Stephen Breyer on the bench.

“I’m not looking to make an ideological choice here,” Biden said. “I’m looking for someone to replace Judge Breyer with the same kind of capacity Judge Breyer had, with an open mind, who understands the Constitution, interprets it in a way that is consistent with the mainstream interpretation of the Constitution.”

Court watchers expect those under closest consideration include Judge Ketanji Brown Jackson of the U.S. Court of Appeals in Washington, Judge Leondra Kruger of the California Supreme Court and Judge J. Michelle Childs of the U.S. District Court in South Carolina.

Biden told Holt the candidates are “incredibly well qualified and documented. They are the honor students that come from the best universities they have experience, some on the bench, some in the practice of law.”

White House press secretary Jen Psaki also said earlier in the week that the president has reviewed “binders of cases” authored by the potential picks.

“He is receiving and engaging with a range of people as he considers this process. I would note also that as he’s looking at the process, he’s reviewing not just bios, but he’s also reviewing cases. And he is looking at binders of cases,” Psaki said. “He’s taking a very thorough approach to it.”

Once Biden names his nominee, she will go before the Senate Judiciary Committee for public hearings. If confirmed out of the committee, her nomination will see a full floor vote in the Senate.

While Harris, as vice president and president of the Senate, could potentially serve as a tie-breaking vote to Biden’s pick since 51 votes are needed to confirm Supreme Court nominees — there is not a single Black woman in the Senate to vote to confirm the first Black woman nominated to the high court.

A group of 14 Black female lawmakers in the House led by Rep. Cori Bush sent a letter to Biden Thursday morning outlining what they are looking for – and there’s a split within the Congressional Black Caucus as to whether it’s appropriate to publicly push for one Black woman over another.

“I just don’t think it’s our place to pit Black women against each other who are trying to get this spot,” Bush told ABC News Congressional Correspondent Rachel Scott.

Bush’s comments mark a clear break from the highest-ranking Black member of the Congress, Rep. Jim Clyburn, D-S.C., who has launched an aggressive campaign to persuade the president to nominate Childs of South Carolina. Childs already has at least one Republican vote if picked.

“If this happens, it will be because of the power of Jim Clyburn in the Democratic world. I think I can get some of my Republican colleagues to follow my lead, and wouldn’t it be something if the first African-American woman on the court was a South Carolinian,” Republican Sen. Lindsey Graham of South Carolina told WYFF earlier this week.

Biden met last week with Durbin and the top Republican on the Senate Judiciary Committee, Sen. Chuck Grassley, R-Iowa, as the president nears his own self-imposed deadline for the historic Supreme Court pick.

At the formal announcement of Breyer’s retirement, Biden said he was seeking a candidate “with character” and a judicial philosophy that “suggests that there are unenumerated rights to the Constitution and all the amendments mean something, including the Ninth Amendment,” which states that “certain rights, shall not be construed to deny or disparage others retained by the people.”