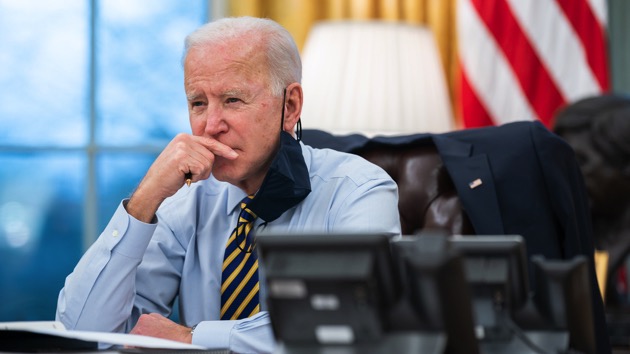 (WASHINGTON) — President Joe Biden was holding his first Cabinet meeting Thursday afternoon at the White House, one day after announcing his massive infrastructure plan, which was expected to be a major topic of conversation for the first in-person session.

The 25 people in the meeting included the 15 confirmed head of departments, plus Shalanda Young, the acting director of the Office of Management and Budget, since Biden’s initial choice for the role, Neera Tanden, withdrew her nomination due to opposition in the Senate.

Vice President Kamala Harris and White House chief of staff Ron Klain, both members of the Cabinet, were also in attendance, along with some other senior White House staff, according to the White House.

The meeting looked different than previous ones due to the COVID-19 pandemic. Instead of taking place in the Cabinet Room, the traditional venue, the group gathered in the East Room to abide by public health guidelines and allow for social distancing, a White House official said.

The gathering was timed to follow Biden’s launch of the first portion of his new infrastructure plan, a multi-trillion-dollar proposal aimed at traditional infrastructure projects to repair roads, rails and bridges, but which also includes billions to expand broadband internet access, community-based care for elderly Americans and investments in clean energy.

The meeting was expected to focus on not only infrastructure but the continued implementation and communication on Biden’s $1.9 trillion COVID relief bill, as well as to outline the role many Cabinet members will play on infrastructure, according to a White House official.