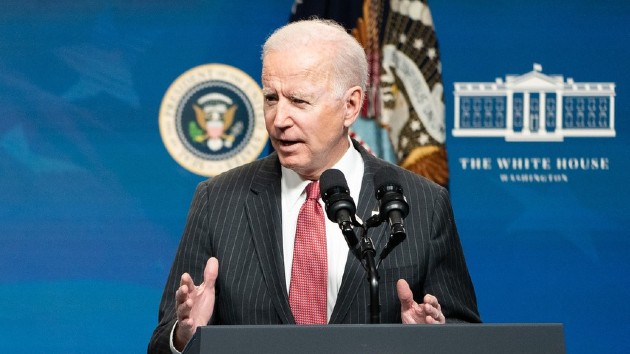 Amid criticism that the administration did not go far enough, the Russian Foreign Ministry blasted the announcement as a “hostile anti-Russian attack … devoid of logic and meaning” and again cast doubt on Navalny’s poisoning.

The sanctions were taken in concert with the European Union, with the bloc’s 27 members announcing Tuesday penalties on four Russian officials for Navalny’s imprisonment — its first sanctions under its new human rights sanction program — with the U.S. “catching up to the EU and U.K.,” according to a senior Biden administration official, after former President Donald Trump did not take action.

Last August, Navalny became sick on a flight in Siberia and was airlifted to Germany, where doctors concluded he was poisoned with Novichok, the military-grade nerve agent. The Kremlin has denied any role.

The Biden administration agreed, with the second official saying the attack on Navalny “follows an alarming pattern of chemical weapons use by Russia” that requires a response.

The U.S. Treasury sanctioned the director of the FSB, the main successor to the Soviet Union’s KGB, along with Putin’s chief of presidential policy directorate and another senior presidential aide, two deputy defense ministers, Russia’s prosecutor general and the director of federal prisons.

But the penalties did not include powerful Russian oligarchs close to Putin, even after Navalny’s close associates circulated a list of names and argued targeting Russia’s rich elite would have a greater impact than targeting senior officials.

Russia’s Foreign Ministry said the sanctions will fail and warned the U.S. “not to play with fire.”

“Calculations to impose something on Russia by means of sanctions or other pressure failed in the past — and fail now,” the ministry said in a statement Tuesday. “Regardless of the American ‘sanctions bias,’ we will continue to consistently and resolutely defend our national interests, rebuffing any aggression.”

Former President Donald Trump never took action to penalize Russia, at times even casting doubt on the conclusion that Navalny had been poisoned: “It’s tragic. It’s terrible. It shouldn’t happen. We haven’t had any proof yet, but I will take a look,” he said in September.

That meant Biden’s administration is following behind the EU and the U.K. which sanctioned six individuals and one entity in October, according to the first senior official. Coordinating with those key U.S. allies makes these sanctions “stronger and more effective, particularly when it comes to Russia,” the official added, because Europe has closer business ties.

The symbolic unity of simultaneous U.S. and EU sanctions sends a message to Moscow, but it’s still unlikely to change the calculus in Putin’s government. The financial penalties will have little impact, especially for those officials who have found ways around previous sanctions to maintain their assets, and few of these officials are likely to travel outside Russia.

Some critics have urged the U.S. and its European allies to go further over Navalny’s imprisonment, but it seems Biden may be unwilling to push too far and have relations spiral further out of control. His administration is “neither seeking to reset our relations with Russia, nor are we seeking to escalate” with Russia, the first senior official said Tuesday.

Sen. Bob Menendez, D-N.J., chair of the Senate Foreign Relations Committee, urged Biden to go further, saying in a statement Tuesday, “Substantial work remains in restricting the ability of corrupt Russian actors to continue accessing the U.S. financial system, and I expect the administration to take additional measures to shore up our financial defenses against dirty Russian money.”