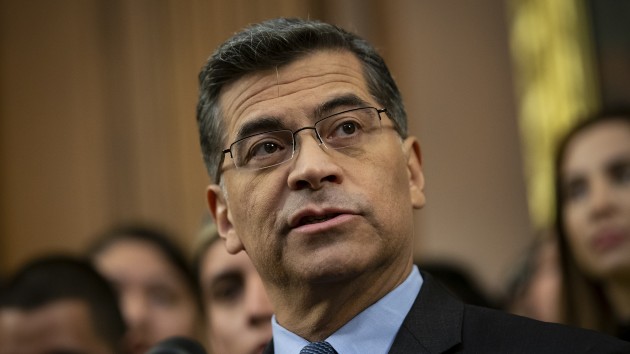 (WASHINGTON) — As the coronavirus pandemic reaches a new 500,000 death milestone, a political battle is brewing over who will take the helm of the Department of Health and Human Services.

President Joe Biden’s HHS nominee, California Attorney General Xavier Becerra, will appear before two Senate committees on Tuesday and Wednesday. It’s expected to be a tense two days, with many Republicans already waging battles against him for his staunchly liberal record.

If confirmed, Becerra would make history as the first Latino to run the department.

Becerra has had 40 discussions with senators in the lead-up to the hearings, including with moderate Republican Sens. Mitt Romney of Utah, Lisa Murkowski of Alaska and Susan Collins of Maine, according to two sources familiar with the confirmation process. On Monday, he met with the two ranking members of the committees, Republican Sens. Richard Burr of North Carolina and Mike Crapo of Idaho, a source close to the process said, adding that Becerra has been received well by members from both sides of the aisle.

But Becerra faces a bumpy road to confirmation as Republicans broadly oppose him.

If Democrats want to go it alone, they’ll need the full support of their caucus plus the tie-breaking vote of Vice President Kamala Harris, but it’s not clear they’ll have it. A spokesperson for Sen. Joe Manchin, D-W.Va., confirmed to ABC News that he is currently undecided on whether to support Becerra’s nomination.

Manchin, a moderate Democrat who has rose to prominence in the evenly divided Senate, threw a wrench into Democrats’ efforts to seat another Biden nominee last week when he announced he would not support the nomination of Neera Tanden to serve as director of the Office of Management and Budget.

On Monday, a group of Republican lawmakers penned a letter to Biden urging him to withdraw Becerra’s nomination.

The group of lawmakers, including 11 senators and many more members of the House, argued that Becerra is inexperienced and ill-prepared to guide the agency.

“Mr. Becerra’s lack of healthcare experience, enthusiasm for replacing private health insurance with government-run Medicare-for-all, and embrace of radical policies on immigration, abortion, and religious liberty, render him unfit for any position of public trust, and especially for HHS Secretary,” the lawmakers wrote.

Republican opposition to Becerra has been mounting since Biden announced his nomination in December.

GOP senators point to Becerra’s prosecutorial record, which includes efforts to challenge bans on abortion, as a major red flag. Becerra prosecuted a well-known case challenging the religious exemption made by the Little Sisters of the Poor, who argued they did not need to provide access to contraceptives under the Affordable Care Act.

“Curiously, the president’s candidate to run the Department of Health and Human Services is the famously partisan attorney general of California,” Senate Minority Leader Mitch McConnell said on the Senate floor. “His recent experience in health policies seems largely limited to promoting abortion-on-demand and suing groups like the Little Sisters of the Poor, which dare to live out their religious convictions.”

Planned Parenthood, which supports Becerra’s confirmation, defended him as a “national leader in fighting back against the Trump administration’s attempts to roll back sexual and reproductive health access” in a memo on Monday from the political arm of their organization, the Planned Parenthood Action Fund.

“Becerra is the staunch sexual and reproductive health and rights champion we need to reverse the damage done, and expand access to care,” the organization said.

Republicans also cited concerns with Becerra’s lack of experience. Becerra served 12 terms in Congress before transitioning to his role as California Attorney General, but his focus hasn’t been on public health, Republicans said.

“If you look at the three main buckets of HHS, he does not have experience in those,” Cassidy said.

Murray will point to instances where Becerra took on pharmaceutical companies and opioid manufactures, and worked to insure health care coverage for those with pre-existing conditions as evidence that he is equipped for the job.

“She will focus on the urgency of seating this nominee on an agency that’s absolutely critical to our COVID response,” the aide said.

Democrats have argued that Becerra has extensive experience in health care policy, first as a congressman who oversaw components of Medicare and then as a defendant of Obamacare as attorney general, using that role to add new focus on the issue.

They’ve also highlighted his work with a Republican attorney general from Louisiana, who he teamed up with last year to try to pressure the Trump administration into reducing the cost of Remdesivir, a treatment for coronavirus.

“That’s why Biden chose this tested, qualified leader to be at the forefront of the pandemic response and to help lower drug prices. We look forward to his hearings and confirmation votes,” Bates said.

Sen. Tim Kaine, a Virginia Democrat on the Senate Health committee, said he doesn’t think experience is really the issue for Republicans.

“They probably don’t like the fact that he has been so vigorous in defending, and successfully so, the Affordable Care Act,” Kaine said.

Michael Tanner, a senior fellow at the CATO institute, a conservative think tank, told ABC News that many of the GOP objections to Becerra are “culture war” issues.

“Becerra is very liberal on abortion rights, he is very pro-immigration, it is the same sort of cultural touch stones that Republicans have used for their base for a long time to rev it up,” Tanner said. “This is for a performance if you’re a Republican and you’re thinking ‘who can I look at in the cabinet to score some points and portray the Biden administration as being too far to the left?"”

According to the Los Angeles Times, Becerra filed over 100 lawsuits against Trump while serving as California attorney general.

In their letter to Biden on Monday, the Republican lawmakers said that Becerra’s nomination flies in the face of Biden’s calls for unity on Inauguration Day.

“His appointment would sow further division at a time our country needs to heal and would endanger lives at a time our citizens need life-saving treatments, vaccinations, and the freedom to work and worship together,” the lawmakers wrote.

“Attorney General Becerra, who helped play a role in getting the Affordable Care Act through, brings decades of health care policy experience to the table. As attorney general of California he fought alongside Republican counterparts to expand access to COVID treatments,” Psaki said.

Outside social justice organizations also back the nomination. In a letter to committee chairs and ranking members on Monday, a group of 31 organizations threw their support behind Becerra.

“In order to emerge from this pandemic with healthier, stronger, more resilient communities, we need a Secretary of HHS who has fought for, and will prioritize health care access and equity for all people in America,” the groups wrote. “For this reason we urge you to support the confirmation of Attorney General Xavier Becerra to be the next Secretary of Health and Human Services.”

According to his opening statement, Becerra will focus on his personal ascent from the home of immigrants to his position as California attorney general, where he worked to defend the Affordable Care Act. He’ll also argue he is ready to fill what has become one of the most critical vacancies in the Biden administration as the pandemic continues to dictate many of Biden’s legislative priorities.

“The COVID pandemic has killed 500,000 Americans, many of them alone without their families. Millions more have lost their jobs and health care. That is not the America my parents would believe possible,” Becerra will say, according to a copy of his opening statements obtained by ABC News. “I understand the enormous challenges before us and our solemn responsibility to be faithful stewards of an agency that touches almost every aspect of our lives. I’m humbled by the task. And, I’m ready for it.”

Both the Senate Health, Education, Labor, and Pensions Committee and the Senate Finance Committee will question him, but only the latter will vote to put his nomination through to the Senate floor.