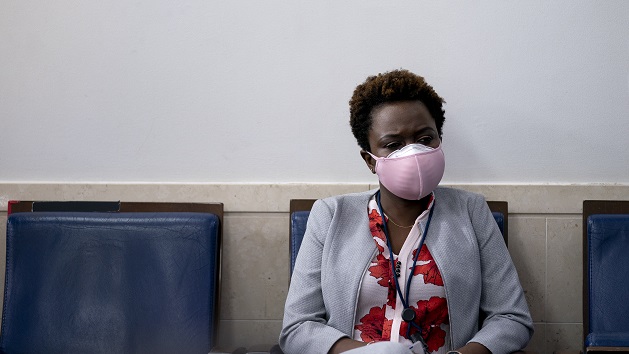 (WASHINGTON) — The Biden administration has a “mandate” to pass COVID-19 relief, including sending direct checks, reopening schools and getting people vaccinated, and that is why they have to “go big,” White House principal deputy press secretary Karine Jean-Pierre said.

President Joe Biden met with Democratic leaders to discuss his $1.9 trillion COVID-19 relief package Wednesday morning. And even as some of the Democrats meeting with Biden continue to push ahead on preparing a budgetary tool to pass the measure without any Republican support on Capitol Hill, Biden told reporters that he was confident he’d get some Republican support.

On Monday, the president met with a group of Republican senators to discuss their $600 billion proposal that did not include funding for state and local aid and reduced the income eligibility for direct payments.

Jean-Pierre told ABC News Chief Washington Correspondent Jonathan Karl that throughout his career Biden reached across the aisle and sought to work with Republicans.

“You’re seeing the kind of the beginning of that — like the bipartisanship conversation, listening to everyone, seeing what folks have to bring to the table,” she said. “But at the end of the day, we — it’s the American people that matter and we have to deliver for the American people.”

Jean-Pierre went on to explain that Biden’s COVID-19 relief proposal was large because it needed to meet the moment.

“I think what matters is that, you know we are — we’re facing the worst economic crisis — a year of economic crisis that we’ve not seen in generations,” she said. “We have to — and this is what the president believes — we have to deliver for the American people. And that’s meeting the moment, right? And you know you hear — you hear us talk about going big and, yeah, we have to go big because this is a crisis that is like no other. We have to — to meet people where they are.”

While Republicans have opposed Biden’s relief proposal for the price tag, timing and addition of Democratic priorities, like a $15 minimum wage, Jean-Pierre cited polling that showed Biden’s plan had bipartisan support from the American people.

“We just have to keep having those conversations with folks on the Hill, but I feel like — and I think the president feels like — we are meeting this moment because we’re hearing it from the American people very loud and clear,” she said.

Karl asked Jean-Pierre if the White House was working on a policy addressing the Biden family and potential business dealings with the government, citing concerns about the president’s brother touting his family name for business gain.

The president has been “very clear” about the kind of ethics he was setting in his administration, she said, adding that Biden abides by the same rules he sets for his staff.

During the interview, Jean-Pierre and Karl also talked about the inauguration and compared the first days of Biden’s term with the beginning of former President Donald Trump’s presidency. Jean-Pierre described entering the White House and getting ready for press secretary Jen Psaki’s first briefing as a “whirlwind.”

“At 12:01 we walked into the White House and we got to work,” she said. “And I think for us, it’s very much keeping the mantra, kind of keeping the words, the promise that Joe Biden made –President Joe Biden made — on the campaign, which is getting to work on Day One.”