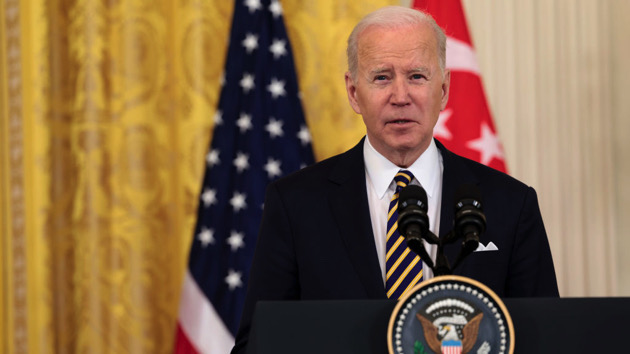 (WASHINGTON) — President Joe Biden received his second booster shot following his scheduled remarks Wednesday about the state of the country’s COVID response, according to the White House.

Biden’s speech promoted the launch of COVID.gov, a new website the White House is billing as a “one-stop shop” to help Americans get better access to vaccines, tests, treatments and masks — as well as area-specific updates on COVID-19 spread.

The website leads users to locations where they can get vaccines, boosters and masks, and it connects people with another White House website to order free at-home rapid tests.

The president also highlighted that the “Test to Treat” initiative he announced at the State of the Union has already expanded to over 2,000 sites nationwide and now through COVID.gov’s new “Test to Treat Locator,” Americans can readily find pharmacies and community health centers to get tested for COVID-19 and receive treatments if needed.

Notably, many of the COVID response efforts available on COVID.gov are the same things the White House says are in jeopardy of running out in the coming weeks and months if more funding is not approved.

Administration officials for weeks have been ringing alarm bells about the critical need for more COVID funding, warning of the severe consequences for Americans.

Biden on Wednesday sent what a White House official called an “urgent, direct message to Congress” to act swiftly to secure funding for the administration’s COVID response.

Last week, the fund to cover testing and treatment for uninsured Americans ran out of money, leaving people to pay as much as $125 out of pocket if they get PCR testing at labs like Quest Diagnostics, one of the biggest in the country.

The funding to cover the cost of administering vaccines for uninsured people will run out next week.

At the same time, monoclonal antibody treatment supplies distributed to states each week has been cut by 35%. And the U.S. supply could run out entirely by May if funding isn’t secured.

The government says it has enough tests to get to the summer, but if there’s another surge, the country will again be caught flat-footed like it was during the omicron wave.

The White House has said without additional funding, “the results are dire” — one official told ABC News earlier this month, “Simply put, failing to take action now will have severe consequences for the American people.”

The White House has asked for $22.5 billion in immediate aid to keep COVID-19 programs afloat. Congress whittled that request down to $15 billion before cutting it from a spending bill entirely in early March. Since then, the White House has urged Democrats and Republicans on the Hill to come to an agreement, but negotiations remain at a stalemate.