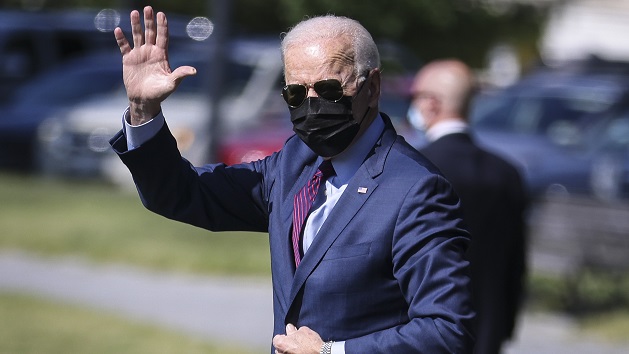 (DEARBORN, Mich.) –President Joe Biden pushed electric vehicles as part of his infrastructure plan and vision for a greener future from Dearborn, Michigan, on Tuesday and in pitching the ease of electric, gave the public a rare visual of a president behind a steering wheel.

While test driving Ford’s F-150 Lightning pickup during an unscheduled stop at a Ford testing site, Biden pulled up to reporters and said, “This sucker is quick.”

Donning his classic aviator shades, Biden drove the electric truck through an empty lot, before telling reporters it “feels great” to be behind the wheel and answering, “I would,” when asked if he would buy one. One Secret Service agent rode in the passenger seat alongside the president.

“I think that we’re going 0 to 60 in about 4.3, 4.4,” Biden said, before demonstrating again how quickly the vehicle can accelerate, appearing to push the gas pedal to the floor. He said he’d lay off the pedal at 80 mph.

Just before speeding off, asked by ABC News Chief White House Correspondent Cecilia Vega if she could first ask him a question about Israel, Biden joked, “No, you can’t. Not unless you get in front of the car as I step on it. I’m only teasing.”

The pit stop came after touring the Ford Rouge Electric Vehicle Center and delivering remarks there in which Biden warned that the U.S. needs to step up and compete with China in the critical field.

“Look, the future of the auto industry is electric. There’s no turning back,” Biden said.

“The real question is whether we’ll lead or we’ll fall behind in the race of the future, or whether we’ll build these vehicles and the batteries that go in them here in the United States or rely on other countries,” he continued.

Biden said China is “leading in this race” where the U.S. used to be, adding, “We can’t let that be sustained.”

As the president’s Memorial Day deadline for “significant progress” on negotiation around his infrastructure plan rapidly approaches, Biden repeated his optimism that there could be bipartisanship but indicated he has yet to see any counter proposal from Republicans in Congress.

Pres. Biden pledges to support American companies: “I’m not lending a single contract to a single company that does not hire Americans, have all American parts, and has a supply chain that is an American product supply chain.” https://t.co/tg551x851c pic.twitter.com/vDKYava25t

“We believe we can find a bipartisan deal on infrastructure, and we look forward to hearing more details of their proposal which they’re going to submit a counter proposal either later today or tomorrow to me. But we made one thing clear: we’ll compromise, but doing nothing is not an option,” Biden said. “The world is not waiting.”

Biden also made a dig at his predecessor, hitting the Trump administration for their frequent “infrastructure weeks” with nothing to show for it, he said, before digging into his own plan.

Former President Donald Trump was also photographed behind the steering wheel at least once — when he climbed inside a fire truck parked in the White House driveway in 2017 during the start of “Made in America Week.” Trump asked reporters, “Where’s the fire? I’ll put it out,” while he mimicked driving the emergency vehicle.

Biden on Tuesday in Michigan laid out the highlights of his plan, including his call for thousands of charging stations across the country as part of the shift towards electric vehicles and investing in manufacturing, research and development.

In particular, Biden highlighted the country’s current shortage on semiconductors, warning that the U.S. needs to ensure these types of shortages don’t happen in the future. Biden said he also understands those who worry about being left behind if his plans to invest in green energy technology pass, but stressed that would not be the case.

“We will leave no one behind. Nearly 90% of the jobs created in my American Jobs Plan do not require a bachelor’s degree — 75% don’t require an associate’s degree,” Biden said.

In a speech that was marked by many “Bidenisms” and call backs to words of wisdom from his father, the president sought to hammer that addressing climate change means creating new jobs. He also said meeting green energy goals could help to restore the U.S. on the global stage.

“If we act to save the planet, we can create millions of good-paying jobs, generate significant economic growth and opportunity to raise the standard of living for people not only here, but around the world,” he said.