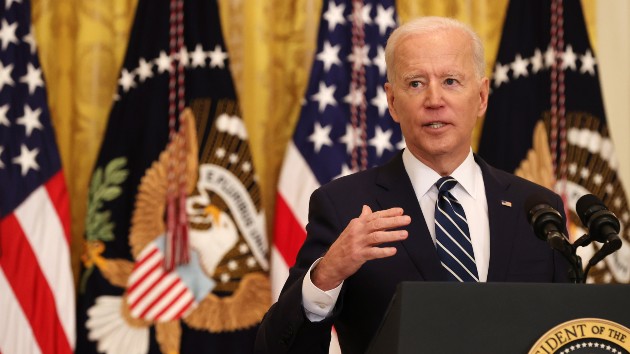 (WASHINGTON) — President Joe Biden faced some of the most thorough questioning in his presidency Thursday when he answered just over an hour’s worth of queries from the news media during his first formal press conference since taking office.

The news conference allowed reporters to break out of the hasty exchanges they typically have with the president to ask follow-up questions and push Biden as he gave lengthy answers on topics ranging from the influx at the southern border to North Korea and the filibuster.

The lack of a major headline — other than him announcing at the start that he was doubling his goal for how many COVID-19 vaccine doses would be administered in his first 100 days in office — was, in a way, a major departure from his predecessor, former President Donald Trump.

Instead, Biden’s policy-heavy responses, during which he sometimes consulted his notes, brought back a level of normalcy to the Washington institution that is a presidential press conference.

“They obviously wanted to keep the focus on what they’ve been able to accomplish so far, and he did that,” Mike McCurry, who served as a press secretary in the Clinton White House, told ABC News. “He didn’t stray into other headline-grabbing moments, and that was probably by design.”

“I thought the press corps had pointed questions, as they are wont to do, but he didn’t react negatively to that,” McCurry said.

He said he thought Biden’s advisers would be “relatively pleased” that the president did not make any comments they would have to “clean up” after the fact.

It took Biden over two months to convene a press conference — much longer than any of his recent predecessors — delaying the tough exchanges that can come in such a setting.

Holding one allows a president to relieve a lot of pent-up pressure to address a slew of questions that reporters have not had a chance to ask him directly.

In Biden’s case, he had not discussed at length his handling of the influx of migrants on the southern border, aside from limited instances like in a sit-down interview with ABC News last week.

During his news conference, he told ABC News Chief White House Correspondent Cecilia Vega that the conditions in packed federal facilities holding unaccompanied minors were “totally unacceptable” — in a slightly more testy exchange — and later implied officials could be removed from their positions if the situation did not “get a whole hell of a lot better real quick.”

Biden said North Korea had violated a United Nations prohibition by testing two ballistic missiles Thursday. And he suggested he would be willing to shift his position on the filibuster — he’s opposed to doing away with the rule, which requires 60 votes instead of 50 to proceed in the Senate — if, he said, “there’s complete lockdown and chaos as a consequence of the filibuster.”

The White House announced nine days ago that this press conference would take place Thursday — providing unusual lead time and risking events out of their control could come to dominate the exchanges.

In fact, there were two major, mass shootings in Atlanta and Boulder, Colorado, North Korea fired off ballistic missiles, and border facilities continued to become overwhelmed with unaccompanied children.

Biden addressed all of those developments Thursday.

Asked if his presidency could be a success if he was unable to surmount Republican opposition to gun control, immigration reform, voting rights and addressing climate change, Biden said: “Let’s see what happens. All I know, I’ve been hired to solve problems — to solve problems, not create division.”

He called those issues “long-term problems” secondary to the challenge posed by the COVID-19 pandemic.

“They’ve been around a long time,” Biden said. “And what we’re going to be able to do, God willing, is now begin one at a time to focus on those as well.”

Like the daily briefings White House press secretary Jen Psaki holds, attendance on Thursday was limited due to COVID-19 protocols.

Rather than a room of reporters packed together like sardines, competing to be called upon, this news conference featured 30 reporters in chairs spread out over the length of the large East Room in the White House.

At one point, the president even stepped away from his lectern, apparently so he could better hear a reporter standing at a distance.

With fewer reporters in attendance and those from less-mainstream news outlets mainly seated farther away, by design, there was less of a chance of Biden having to deal with unexpected or out-there questions.

And despite all the protocols and Biden’s announcement at the start that he was doubling his vaccine-dose goal — not one reporter asked a question about the coronavirus pandemic.

It’s a topic Biden has discussed at length on other occasions, unlike many of the issues journalists did take the time to ask about on Thursday.