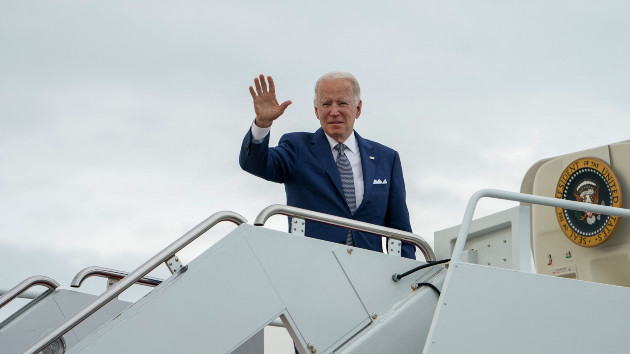 (WASHINGTON) — With much of the Biden administration’s attention this year focused on Russia’s invasion of Ukraine, President Joe Biden turns his attention to Asia Thursday as he embarks on a visit to South Korea and Japan — a trip that the White House says “comes at a pivotal moment” for his foreign policy agenda.

The trip will mark the president’s first trip to the region since taking office and will feature a heavy focus on North Korea and China. While the president campaigned heavily on making China a main focus of his foreign policy, the war in Ukraine has occupied Biden’s foreign agenda of late.

While the White House may hope that the trip shows that the president has not taken his eye off the challenge China poses, Ukraine will still loom large over the trip.

“President Biden has rallied the free world in defense of Ukraine and in opposition to Russian aggression,” White House national security adviser Jake Sullivan said Wednesday. “He remains focused on ensuring that our efforts in those missions are successful, but he also intends to seize this moment, this pivotal moment, to assert bold and confident American leadership in another vital region of the world — the Indo-Pacific.”

Biden will begin his journey in Seoul and wrap the visit in Tokyo. Sullivan said this will be an “opportunity to reaffirm and reinforce two vital security alliances” and to “deepen two vibrant economic partnerships.”

“The message we’re trying to send on this trip is a message of an affirmative vision of what the world can look like if the democracies and open societies of the world stand together to shape the rules of the road, to define the security architecture of the region, to reinforce strong, powerful, historic alliances, and we think putting that on display over four days bilaterally with the ROK and Japan, through the Quad, through the Indo-Pacific economic framework, it will send a powerful message. We think that message will be heard everywhere,” he said.

Asked to what extent is the message of this trip a cautionary tale delivered to China and their aggression towards Taiwan, Sullivan said the message “will be heard in Beijing, but it is not a negative message, and it’s not targeted at any one country.”

While in South Korea, President Biden is expected to meet with President Yoon Seok-youl, “engage with technology and manufacturing leaders” who are “mobilizing billions of dollars in investment here in the United States,” and he will visit American and South Korean troops who are “standing shoulder-to-shoulder in defense” of threats posed by North Korea, Sullivan said.

White House press secretary Karine Jean-Pierre said Biden will not be visiting the Korean Demilitarized Zone (DMZ) this trip. He visited the area as vice president in 2013 and while serving in the Senate.

Sullivan, though, continued to repeat that U.S. intelligence continues to show that North Korean leader Kim Jon Un, who ramped up missile launches in 2002, could launch a long-range missile test, nuclear test, or both in the days leading into, on, or after the president’s trip to the region.

“We are preparing for all contingencies, including the possibility that such a provocation would occur while we are in Korea or in Japan,” Sullivan told reporters.

He said that the U.S. is coordinating with allies in South Korea and Japan, as well as counterparts in China.

“We are prepared obviously to make both short and longer-term adjustments to our military posture as necessary to ensure that we are providing both defense and deterrence to our allies in the region and then we’re responding to any North Korean provocation,” Sullivan said.

In Japan, Biden will meet with Japanese Prime Minister Fumio Kishida to discuss economic relations and global security issues, including North Korea, and they will launch a new economic initiative for the region.

“The Indo-Pacific Economic Framework, IPEF, as we affectionately call it, is a 21st century economic arrangement, a new model designed to tackle new economic challenges,” Sullivan said. “From setting the rules of the digital economy, to ensuring secure and resilient supply chains, to managing the energy transition, to investing in clean modern high standards infrastructure.”

And while in Tokyo, Biden will also participate in a second in-person Quad summit with his counterparts from Australia, India and Japan. They last met in September at the White House.