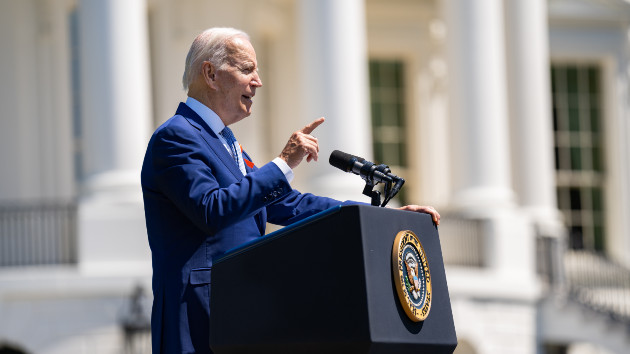 (WASHINGTON) — With less than two weeks until midterm Election Day, President Joe Biden is doubling down on the message that a Republican-run Congress would be worse for the U.S. economy.

“If I had asked you — and we were just walking down the streets — can you tell me what the Republican platform is? What they’re for? I’m not joking. I’m being deadly earnest,” Biden said as he delivered remarks Thursday at Onondaga Community College in Syracuse, New York.

Arriving in Syracuse, Biden was asked by a reporter how he planned to help Democrats across the finish line this midterm cycle.

“I think they’re going to come across the finish line,” Biden replied.

The economy is top of mind for voters heading into Election Day, and polls show Americans trust Republicans to handle the issue more than they do Democrats. GOP candidates have seized on inflation in their midterms messaging, blaming higher costs on Democratic policies.

The White House, in an aggressive push to counter that message, sent out a document to reporters and held a conference call on Wednesday outlining what they are calling “congressional Republicans’ five-party plan to increase inflation and costs for American families.”

According to the White House, the five parts of congressional Republicans’ economic plan include “$3 trillion in tax cuts skewed to the wealthy — which would add to the deficit and make inflation worse;” “raising prescription drug costs for millions of seniors;” “increasing health insurance premiums;” “increasing energy bills in 2023 and beyond;” and “increasing student loan payments.” As a “bonus,” the White House said Republicans are also “threatening the global economy to cut Social Security or Medicare.”

Biden in his remarks criticized his predecessor, Donald Trump, saying the previous president “made a string of broken promises” when it came to the economy and infrastructure.

“We’ve kept our commitments … and it’s working compared to what the very conservative Republicans are offering these days,” Biden said.

Biden on Thursday was bolstered by new government data showing the U.S. economy expanded in July, August and September. Gross domestic product grew 2.6%, a contrast to the first six months of the year when the economy shrank 2.2%.

“So economic growth is up, the price of inflation is down, real incomes are going up and the price of gas is down,” Biden said. He also touted the deficit reduction, his student loan forgiveness plan, the administration’s crackdown on junk fees and other policies.

During the Syracuse visit, Biden touted Micron’s pledge to invest $100 billion in semiconductor production over the next 20 years, calling it the “one of the most significant investments in American history.” The Micron pledge came after Congress passed the CHIPS Act, which allocates more than $50 billion to encourage more domestic production of the chips.

“We wouldn’t be here without him,” Biden said of Schumer. Highlighting the bipartisan support for the CHIPS Act, Biden also thanked Rep. John Katko, R-N.Y., for voting yes on the legislation.

Schumer and Biden were heard discussing some midterm races, including the Pennsylvania Senate debate this week between John Fetterman and Mehmet Oz, while they met at the Syracuse airport on Thursday.

“Let me close with this,” Biden said. “It’s been a rough few years for a lot of the people I grew up with, hard-working Americans. For a lot of families, things are still tough. But there’s some bright spots out there, where America’s reasserting itself.”