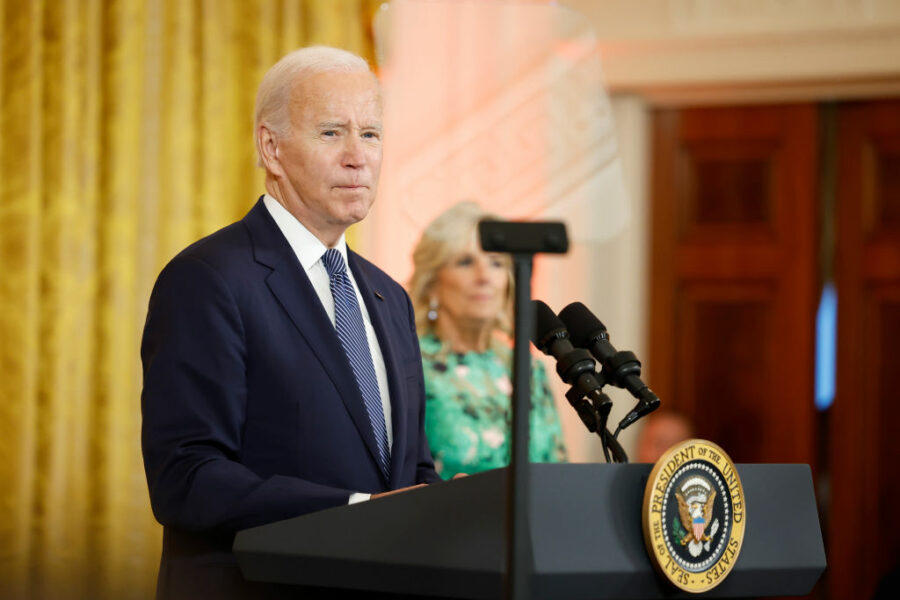 Biden told the volunteers, as well as staffers and grassroots donors, that “the power is in your hands” to “get out the vote.”

Early voting has already started in many jurisdictions, and the president said he was going to visit “a bunch” of districts before voting ends Nov. 8.

But the only travel he is planning outside of Washington this week will take him to an official event in Syracuse, New York, to highlight investments in microchip manufacturing — to fundraiser for Pennsylvania Democrats on Friday in Philadelphia, and to his home in Wilmington, Delaware.

He also plans to hold several virtual fundraisers for members of Congress in Nevada, Iowa, and Pennsylvania, according to the White House. The only political rally he has on his schedule will take place in Florida on Nov. 1, alongside the Democratic nominees for governor and Senate, Charlie Crist and Val Demings.

The president, whose popularity in public polling remains low, has campaigned at a slower pace than his recent predecessors did in the run-up to the midterms during the start of their presidencies. Some Democratic candidates have avoided saying whether they want him to join them on the campaign trail; Democratic Rep. Tim Ryan, who is running for Senate in Ohio, has even said he did not want Biden to come.

The president on Monday ticked through a laundry list of his accomplishments in office and delivered his typical stump speech, covering topics ranging from abortion and the economy to infrastructure, taxes and health care bills.

“I can’t think of a more consequential election that I’ve been involved in,” Biden said. adding that maintaining Democratic control of the House and Senate is “a big deal.”

“So far, we’re running against the tide, and we’re beating the tide,” he said. “But we just have 15 days until one of the most important elections in our lifetime. And that’s going to shape the way this country looks like for the coming decades.”

As polling seems to suggest Democrats and running up against Republic headwinds, Biden said he thought the momentum would shift.

Biden painted Republicans as having no actual platform aside from tearing down his achievements, specifically calling out House Minority Leader Kevin McCarthy, as he has done before.

“Tell me what the Republicans are for, what’s their platform?” Biden said. “Not – not a joke. What are they running on? If they win, what do they say they’ll do? I have to hand it to it, as I said, they’re saying it out loud. They’re so confident they’re gonna win, they’re saying it without an ounce of shame.”