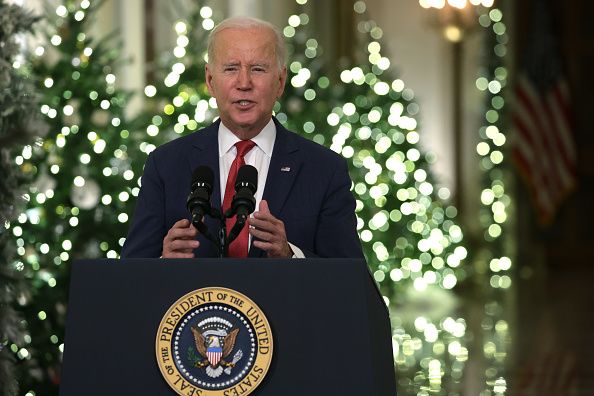 (WASHINGTON) — President Joe Biden delivered what the White House called a “Christmas address” Thursday afternoon where he emphasized unity, reflection and kindness as 2022 comes to end.

Biden said he hopes “this holiday season will drain the poison that has infected our politics and set us against one another” and mark “a fresh start for our nation — because there’s so much that unites us as Americans, so much more that unites us than divides us.”

“Our politics has gotten so angry, so mean, so partisan, and too often we see each other as enemies, not as neighbors, as Democrats or Republicans, not as fellow Americans. We have become too divided,” he said. “But as tough as these times have been, if we look a little closer, we see bright spots all across the country. The strength and determination, the resilience that’s long defined America. We’re surely making progress.”

“Things are getting better. COVID no longer controls our lives. Our kids are back in school. People are back to work,” he continued. “So, my hope this Christmas season is that we take a few moments of quiet reflection, find that stillness in the heart of Christmas, that’s at the heart of Christmas, and look, really look at each other not as Democrats or Republicans, not as members of Team Red or Team Blue, but as who we really are.”

Biden acknowledged the holidays can be a time of “great pain and terrible loneliness” for many Americans, reminding that 50 years ago this week he lost his first wife, Neilia, and infant daughter, Naomi, in a car accident while his family was out shopping for a Christmas tree.

“Here’s what I learned long ago: No one can ever know what someone else is going through,” he said. “That’s why sometimes the smallest act of kindness can mean so much. A simple smile. A hug. An unexpected phone call. A quiet cup of coffee. Simple acts of kindness that can lift a spirit, provide comfort, and perhaps, maybe even save a life.”

The speech was teased as focusing “on what unites us as Americans, his optimism for the year ahead, and wishing Americans joy in the coming year,” the White House said.

Biden’s address follows a powerful address from Ukraine’s President Volodymyr Zelenskyy to Congress where the wartime leader invoked the Battle of the Bulge at Christmastime during World War II and reminded Americans of shared values during the holidays as Russian continues its violent invasion of Ukraine.

“Just like the brave American soldiers which held their lines and fought back Hitler’s forces during the Christmas of 1944, brave Ukrainian soldiers are doing the same to Putin’s forces this Christmas,” Zelenskyy said.

The speech has drawn comparisons to Winston Churchill’s address to Congress 81 years ago — seeking U.S. help to repel the German invasion of Europe.

“On this special Christmastime, I want to thank you, all of you. I thank every American family which cherishes the warmth of its home and wishes the same warmth to other people,” Zelenskyy said.

Biden’s remarks Thursday also came as Senate lawmakers reach a deal on the massive $1.7 trillion government funding bill, which includes $45 billion to Ukraine. That funding has faced resistance from House Republicans, days before they take control of the chamber.

The president spoke earlier in the day from the Oval Office with a warning on “dangerous” winter weather conditions impacting the country and encouraged anyone planning on traveling for the holidays to “leave now” before it gets worse.